Derek And The Darling - Rockface 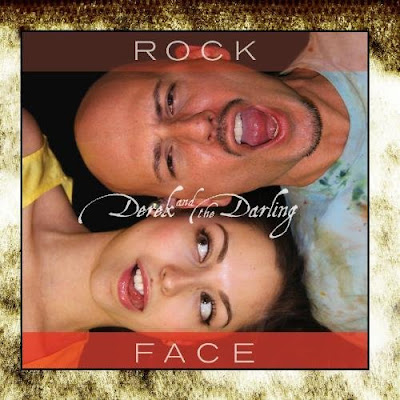 Derek And The Darling - Rockface
2010, 7 Trick Pony LLC
Derek And The Darling is the musical union of Derek Nicoletto, former lead vocalist from Telling On Trixie and Sammi Garrett. In a turn for both, their debut EP together is much more electro-pop than their former lives are guitar-oriented songwriters. Two two met while studying in the Improv program at the Upright Citizen's Brigade Theater in New York City, the melting pot that gave start to such comic luminaries as Tina Fey, Rachel Dratch, Will Ferrell, Sarah Saltberg and Amy Poehler. Derek And The Darling’s debut release, Rockface, is a solid introduction to Derek And The Darling.

Rockface opens with "Hustler With A Rescue Plan", a catchy dance/pop tune right out of the 1980's full of synth and the capable voice of Derek Nicoletto. Things get a little more pointed with "You", featuring The Darling, Sammi Garrett on lead vocals in a guitar-driven power-pop tune about playing relationship games until the right one comes along. It's a dark tune full of unstated intentions and bent and broken emotions. "Suddenly" finds Nicoletto returning to the mic in a mellow dance tune that seems to be more informational than story based. The song has a nice sound but is a bit bland for substance. Derek And The Darling rev things up a bit again with "Lucky Lola", sharing vocals on a heavy pop/dance tune that's ear candy but not likely to retain interest after the first few listens. Rockface closes with "Alabaster Sky", a deeply melancholy song that sounds like it might have come from a William Finn musical. It's the best songwriting on the album in spite of being about facing death.

Derek And The Darling surprise with their debut EP, Rockface. The lighter fare here is more dance oriented. This doesn't excel but reflects competent songwriting and musicianship, with both Derek Nicoletto and Sammi Garrett having solid, listenable voices. Derek And The Darling close strong, however, showing a depth and nuance in songwriting talent that is unusual. Rockface is worth spending some time with, both for what it is and for the potential it bespeaks.

Labels: Derek And The Darling, Sammi Garrett, Telling On Trixie