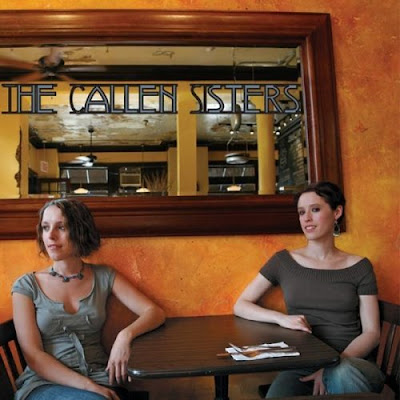 Jessa and Beth Callen grew up with music, whether in their native Westport, Massachusetts or their adopted hometown of Saratoga Springs, New York. Getting their start at venues such as the venerable Caffé Lena, The Callen Sisters moved on to SUNY Purchase and later New York City. Writing highly personal songs about some of life’s darker threads, The Callen Sisters keep their sound light with a mix of acoustic instruments including the harp. In 2007 The Callen Sisters released their self-titled debut album, produced by Buffalo, New York native Dan Castellani. The Callen Sisters are currently preparing for a tour of the Northeast US, as well as the release of a new album in the Fall of 2010.

The Callen Sisters opens with "Anomie", featuring a memorable melody wrapped in an energetic yet reserved arrangement. The Callens have gorgeous voices on both lead and harmony, and this song flows like water. "Irrelevant" is soulful with a slightly funky feel. The harp creates wonderful accents in a neo-nightclub femme-fatale number. "Like You" and "Life" are decent enough, but don't have the motivation of the first two songs. "Wildfires" is full of emotion, but is a bit too contained. "Lullabye" is gorgeous, with Jessa Callen coming a bit more out of her shell.

Things get interesting on "Tangled Up", a song of deep emotion and a more forward approach (both musically and lyrically). The Callen Sisters show a mild but deep pop sensibility on this song; one that could turn into a hit ballad in the right hands and/or arrangement. As is, it's a fine piece of songwriting. Phase maintains this more vibrant feel in a song full of shifting tensions and sensitivities. The approach is still very low key, but The Callen Sisters use their instrumentation and phrasing to build a sense of drama into the song. The funereal feel of "Almost Gone" gives a stark view of the death of a loved one. The Callen Sisters offer up angelic vocals in a dirge-like setting, displaying the darkness of suffering and the release of death in harmonic coloring that is bone-chilling in its intensity and beauty. "Whirlwind Came" addresses the capricious nature of Fate in a memoriam that serves as an epilogue to "Almost Gone". The Callen Sisters closes with "Wake Up", a song about setting things right. The song is fairly generic, although the vocal constructions in the closing moments are worth tuning in for.

The Callen Sisters have moments both mundane and sublime on their self-titled debut. The family chemistry works for Jessa and Beth Callen; the album crests and troughs on the strength of the songwriting from song to song. Sonically there's not much more you could ask for while lyrically the album is hit or miss. Over time expect the songwriting to even out, and The Callen Sisters may have a significant career ahead of them.