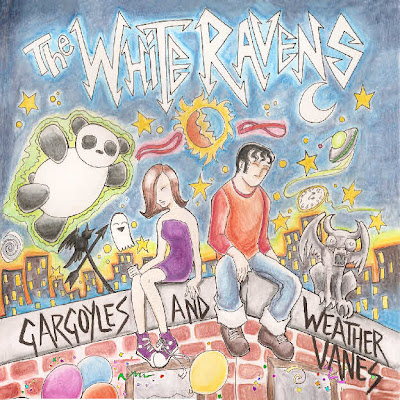 Amy and Will Bennett have an interesting chemistry; as The White Ravens the sonic love children of They Might Be Giants and Gwen Stefani craft incredibly catchy and quirky tunes that add a new pastiche to geek rock. Add in the stabilizing influence of Billy Joel drummer Liberty DeVitto and you have a sound that is downright virulent. The band's bio is full of snarky humor, but don't mistakes The White Ravens for a novelty act. Will Bennett plays keyboards with a tenacity that Ben Folds would be proud of and Amy Bennett (who sounds a lot like Monica Attell) attacks each vocal line like she means business. The White Ravens will release their sophomore album, Gargoyles And Weather Vanes on July 6, 2010.

Just using piano, bass and drums, The White Ravens fill up more sonic space than most bands would dream of, showing the same sort of not-quite-reckless abandon we heard from Ben Folds in his early days. There's more pop sensibility here, and Amy Bennett's voice is tuneful with an acerbic edge that will hold your attention, but it’s the instrumental interplay that makes Gargoyles And Weather Vanes such a trip. There are definite stylistic nods to groups such as Billy Joel and Ben Folds as well as acts such as Belly and The Breeders, but the mix here is so distinctive and fresh you'll forget that rock n roll is supposed to be dead.

Opening with "Sparks", The White Ravens create a dense musical tapestry. Amy Bennett's sassy vocals light up the album and Folds fans will recognize the piano style Will Bennett affects here. Meaning may prove elusive at times on the album, but when listening to songs such as "Tick Tock" you simply won't care. If all rock records sounded this good no one would buy anything else. "Rubber Band" is so cliché it's ironic; a quirky, angular tune about resilience that is simply irresistible. The White Ravens throw a pleasant curve ball on "Atomic Panda", going for an electro-rock sound that is highly catchy and has an edge that could slice timber. Its pure 1990's alternative here, but the Bennetts make it all their own.

"Broken Halves" is about the realization that things aren't as good as they seem in a relationship. There are a series of musical resets here that seem to parallel the sort of two steps-forward, one-step back process that such relationship realizations come by. It's a solid tune, a bit more reserved than some of the other material here, and shows a slightly softer side to Amy Bennett as a vocalist. The White Ravens get a bit too comfortable past the mid-point of Gargoyles And Weather Vanes, but pick things back up by the time they reach "Rainstorm", the peppy rock n roll story of a huckster exploiting the lost and lonely. The arrangement here could have come out of a 1970's Billy Joel recording session with the distinctive mix of piano, sax and percussion sounding more than a bit familiar. "Draco" opens like a Ben Folds tune, but quickly turns into a strong mid-tempo pop tune. The White Ravens will continually surprise you with tempo breaks and changes throughout the album, taking the musical wherever they want even if it flies in the face of convention. Gargoyles And Weather Vanes closes with "Eulogy", a dark, minor-key composition that pays tribute to cities hit by urban decay while posing the inevitability of change. It's an apropos closing for a band that seems to rebuilding rock n roll on the ashes and memories of those who came before.

The White Ravens will confound and astound you. It's been awhile since rock n roll sounded this fresh or this good. Amy Bennett eschews the snarl of past female rockers and instead hits you with a lopsided smirk you might find familiar if you're a fan of Tina Fey. Will Bennett plays piano like nobody's business, and as the primary songwriter shows a distinct amount of promise. Liberty DeVitto is... Liberty DeVitto. Gargoyles And Weather Vanes reflects both the best and darkest intents of humanity as seen from above, and as a title it is a near-perfect reflection of The White Ravens. You won't be able to get The White Ravens out of your head.

Rating: 4 Stars (Out of 5)
Learn more about The White Ravens at http://www.whiteravenmusic.com/ or www.myspace.com/whiteravensmusic. Gargoyles And Weather Vanes drops on July 6, 2010, but you can purchase the album now directly from The White Ravens. Expect availability through Amazon, iTunes and other national outlets.
Posted by Wildy at 6:11 AM