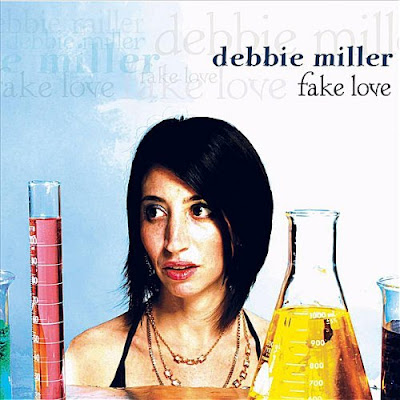 Debbie Miller is a New York City-based singer/songwriter who encompasses the quirky wit and style of an East Village folk singer and the avant-garde style cultivated south of the Brooklyn Bridge. A classically-trained pianist, Miller is a stylish story-teller who mixes wit and wisdom in songs that slice at the truth from angles you might not expect. Miller's debut album, Fake Love, presents eleven finely crafted tunes that vacillate from frank to farcical without ever losing sight of the essential humanity that inspired each bit of musical observation.

Fake Love opens with "Tippy Toe", a demented and tuneful song about worming your way into someone's heart. There's a vaguely obsessive tone to the song, but it's delivered in such cute fashion this predilection may slip by you. "Tippy Toe" is the song that got Debbie Miller "discovered" and led to the recording of Fake Love, and gives you a solid picture of the dynamic persona behind the piano. "Eclipse" is a daydream about falling love and all of the magical moments that can happen in the beginning weeks. Miller takes a ham-handed stab at innuendo here but makes up for it with a delightful little twist at the end of the song.

Miller engages in an intriguing piece of European style Baroque pop with "Kindly Remove", dropping some serious piano work and orchestration on a tune song with a bratty, moll-like vocal line. It's a brilliant juxtaposition you have to hear to believe. "F Train" is a straight-forward tune about the inanities of hooking up. Miller is dead on for observation and commentary, flashing wit in a life lesson that is best learned without the lonely subway ride home in the morning. Miller turns vulnerable with "I Rise", a tune about falling in love and placing your heart fully in the hands of another; and the magic that can arise from that decision. It's a pleasant turn and helps broaden the listener's understanding of Debbie Miller's depth as a songwriter.

"Lite Brite" laments the reality that often waits at the end of the chase, recounting her acquisition of a Lite Bright at the age of twenty-four after wanting one for years and realizing how lame it actually is. It's a funny tune with solid life lesson in the lining. Miller seemingly takes on domestic violence and the idea that victims bring it on themselves in "Made You". Not so much outright humorous and sardonic, Miller lambastes the idea in song without ever really contradicting it. It's a neat trick; one that could be easily misunderstood by those who don't listen carefully. "Did You Ever Wonder" is the last official track on Fake Love, a dreamer's queries about all-encompassing belief and/or faith. It's the questioning of one who wants to believe but can't quite commit to the childlike faith of another; not so much cynical as uncertain. It's a neat bit of songwriting. Miller gives listeners a real treat with the untitled bonus track, a tune about obsessive fandom that turns into a real laugher when Miller forgets a verse. The song is recorded live-in-studio, and Miller has fun with her gaffe, offering yet another positive glimpse at the artist behind the songs.

After listening to Fake Love, you're likely to decide that Debbie Miller would be the perfect friend to have over to dinner parties. The songs on Fake Love are smart, heartfelt, and sometimes uproariously funny. Miller takes the approach of a classic troubadour, peeling the layers of life to show you new perspectives using moments both earnest and amusing, alternating between a piano style that calls to mind Tori Amos and singer/songwriter guitar. Fake Love never really falls flat, although there are quiet moments. Nevertheless, Debbie Miller gives listeners their monies worth with Fake Love. Make sure you check it out.

Rating: 3.5 Stars (Out of 5)
Learn more about Debbie Miller at http://www.thedebbiemiller.com/ or www.myspace.com/thedebbiemiller. Fake Love is available in various formats from CDBaby, Amazon and iTunes.
Posted by Wildy at 5:00 AM