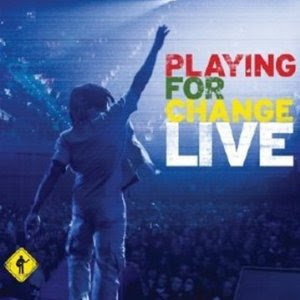 Playing For Change Live opens with a rousing version of "Fannie Mae", driven by a classic R&B backbeat and some seriously dynamic vocal performances. "Don't Worry" has a gospel feel and a reggae beat; a feel good tune with secular spiritual undertones. "I’ve Got Dreams To Remember" is full of sorrow and hope and a heart-rending vocal line; but the breakdown at about three-and-a-half minutes thoroughly destroys the rhythm of the song. The band picks things up and put it back together, but the flow is lost. Playing For Change marries a northern African style to a funk groove on "Fela Ngaye", an entertaining and danceable tune that's worth checking out, but by now there is a lack of cohesion of direction on the album. For a live performance there's no real flow; it's more a compilation of songs played live, but the band is traveling willy-nilly through a songbook that's drawn from all compass points.

"Love Is My Religion" is an easy-going reggae tune that's a fun listen; a pleasant turn that underscores the lack of direction in the performance. Likewise, Playing For Change's cover of Bob Marley's "One Love" is enjoyable, but remarkably tame for a band that made it because of the vitality and personality of their individual performances. It's as if the action of time together and the influx of polished industry influence has taken some of the time out of Playing For Change. The band closes out with the song that started it all, Ben E. King's "Stand By Me". It's a solid performance and the expected closer.