Scott Miller & The Commonwealth - For Crying Out Loud 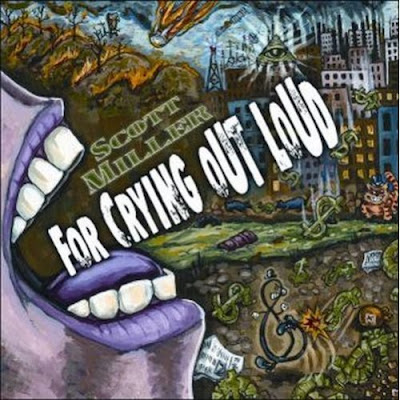 Scott Miller & The Commonwealth - For Crying Out Loud
2009, F.A.Y. Recordings

How do you take the bandleader from Jeff Foxworthy’s Blue Collar Comedy Show seriously? You listen, of course. And if you listen to most anything Scott Miller has put down on tape, you’ll know you’re listening to a serious musician. The son of Scots-Irish farmers (he refers to his lifestyle growing up as “Amish that drink”); Miller learned an appreciation for melody and frugality of words at a young age. After numerous albums and tours, Miller’s sound has matured and taken on the wizened air of a long-time singer-songwriter. This is wholly apparent on his 2009 album, For Crying Out Loud, with his band The Commonwealth.

Miller opens with "Cheap Ain't Cheap (For Crying Out Loud)", a highly catchy piece of acoustic rock n roll. Miller has a pleasant voice, and this tune is just a lot of fun. "Sin In Indiana" shows Miller's witty side in a bluesy romp you won't want to miss. Southern rock is the thing in "Iron Gate"; the song is very danceable and features some serious guitar work. It's a tune about an argument where he tells his girl to get out; she does and she's looking for trouble. "I'm Right Here, My Love" is a great duet with Patty Griffin that mixes love and insecurity in a whirl of human frailty. "Let You Down" is entertaining, danceable rock with an oldies feel. Miller keeps up the good time flavor with "Wildcat Whistle" before transitioning into the sweet, working class love ballad "She's Still Mine".

"Claire Marie" is the best example of Miller's songwriting ability on the album. Classic and southern rock mix over a 1960's backbeat and rinky-tink piano style in a tune about the distractions a beautiful girl can create that finds Miller begging for mercy before it’s done. Miller keeps the R&B base for "I Can't Dance", an ironically danceable tune. "Double Indemnity" is the gritty tale of a man on death row who perhaps ought not to be. There's a femme fatale in the mix who will make off with the money when he's gone. It's never clear whether he or she did, but she's certainly going to get away with it. Miller closes with "Appalachian Refugee", a charming story/character song with distinctive character development. The Appalachian folk/country mix is no surprise, but the depth of character that Miller creates both in the writing and performance of this song is substantial.

Scott Miller & The Commonwealth hit all the right notes on For Crying Out Loud, a highly entertaining and musical endeavor. Miller's voice is pleasant enough to spend an hour or two listening to a few times per week, and The Commonwealth is as tight and as talented as can be. Miller is one to watch.

Learn more about Scott Miller & The Commonwealth at http://www.thescottmiller.com/ or www.myspace.com/thescottmiller. You can purchase For Crying Out Loud directly from Scott Miller in his webstore. You can also purchase the album in various forms from Amazon and iTunes.
Posted by Wildy at 5:00 AM