Will Knox - The Matador & The Acrobat 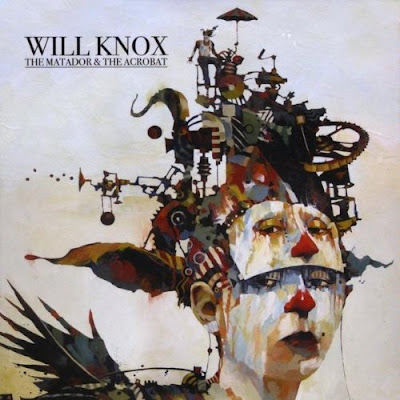 Born in Hammersmith, England, Will Knox moved to Boston at the young age of 18 and has now moved on to New York City. The influences of both his home and his travels weigh heavily on Knox' latest album, The Matador & The Acrobat. Writing about the darker places of the human heart, Knox wraps up human imperfection in delicious little alt-folk tunes; always with an eye toward hope. His is not a world in decline, but a world grown beyond the understanding of hearts and minds that have never been fully prepared for the sophistication the modern age calls for. The Matador & The Acrobat represents the classic struggle between humanity's expansionist tendencies and our inherent insecurities.

Knox opens with "The Matador And The Acrobat I", a 36-second intro that introduces the narrator as an acrobat, bending himself to expectations and avoiding trouble, while inside resides a voice who is a fighter. "Buckled Knees" represents the emptiness of sacrificing yourself for stardom; when you achieve what you want there's nothing of you left to enjoy it. Knox uses Los Angeles as the Mecca for this emptiness, and the character in the song realizes this emptiness after he's already been broken by the machine. "A Painted Smile" is a song about losing your bearings, a like outcome from "Buckled Knees". Imagine The Beautiful South writing in the vein of The Wall-era Pink Floyd and you'll have a pretty good idea of the sound.

"Three Blind Mice" represented what goes on behind the mask of "A Painted Smile", describing the demons that unhinge the mind. The subtle disturbed arrangement is a great contrast to the lyrical content. "Belly Of The Beast" takes on the New York City Subway and the dark side of the bright city above. It's a wonderfully apt allegory for the sights and sounds beneath the city. Knox expresses existential angst in "Footprints On The Moon", noting the human capacity for destructive behavior and expressing the hope that we are not know one day simply by the artifacts we leave behind. "The Matador And The Acrobat II" is a transition, struggling between the comfort of the known and the agony of prospective change.

"Heart Strings" is the soliloquy of a recently disabused heart, looking back on all the manipulations he was caught up in. It's a powerful tune for the sense of helplessness that gives way to purpose. "Cog In The Machine" continues the theme, recognizing one's role in the greater machinations in life and making the choice to simply step out of the machine. Knox pays tribute to the roots of New York City, noting both the immigrant labor that raised the city and the way in which the island was acquired. "Never Letting Go" is a song about getting stuck in an emotional cycle; going around and around in circles but never breaking free. "The Circus Absurd" highlights again the sense of being a part of something greater, and the idea that this greater has something horribly wrong with it. Closing with "The Matador And The Acrobat III", Knox appears ready to step outside of the script and make his own path.

Rating: 3.5 Stars (Out of 5)
Learn more about Will Knox at http://www.willknox.com/ and www.myspace.com/willknoxmusic. The Matador & The Acrobat is available in multiple formats from Amazon and iTunes.
Posted by Wildy at 4:55 AM