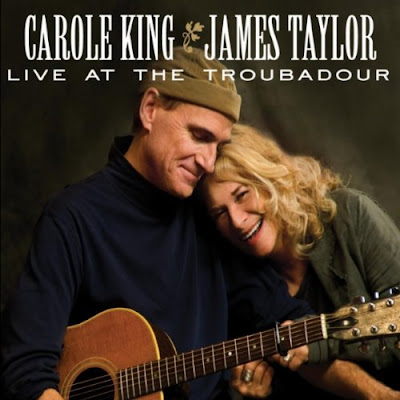 Carole King and James Taylor are icons each in their own right. Carole King is one of the premiere songwriters of the pop/rock era, charting 118 songs on the Billboard charts as a songwriter, including hits for Celine Dion, The Shirelles, The Drifters, Little Eva, The Chiffons, The Everly Brothers, The Monkees and Aretha Franklin. Over the course of her career King has amassed six top-ten albums, four GRAMMY Awards and induction into both the Songwriters Hall Of Fame and Rock And Roll Hall Of Fame. James Taylor has had similar success, earning five GRAMMY Awards, the George and Ira Gershwin Award, and honorary doctorates from two colleges, including the Berklee College Of Music. King and Taylor played together regularly in the early 1970's, and last resurrected their old show to the delight of longtime fans. Hear Music and Syzygy Productions recently released a document of that tour called Live At The Troubadour.

King and Taylor offer up a joyous retrospective on Live At The Troubadour, hitting on some of the highlights of the early parts of their careers. Playing with the band they toured with in the 1970's adds a special touch, as if you're listening in on a family jam where all the prodigals have returned after years away but have never forgotten the chemistry with which they once wove their instruments. The album opens with "Blossom", done in a simple style that allows the pretty melody the full stage. It's the perfect opening to an album that recalls a simpler time in pop music when things like melody and lyrics were of utmost importance. Carole King shares some of her biggest hits from over the years, such as "So Far Away", "It's Too Late", "Will You Love Me Tomorrow" and "I Feel The Earth Move". The latter shows that King is still a dynamic performer, a fact that's mostly overlooked nowadays but was well known in her performance heyday in the early 1970's.

James Taylor offers anecdotes, funny stories, and a few classic songs as well. His story about the origin of "Sweet Baby James" is charming and funny, and the song is offered up in classic form. "Something In The Way She Moves", "Machine Gun Kelly" and "Fire And Rain" will not disappoint longtime fans, and may even snag a few new ones in the process. The connection between King and Taylor seems strongest at the end of the show. Taylor launches into the King-penned "You've Got A Friend", with King providing harmony vocals. Next up is the pop classic "Up On The Roof", with King and Taylor trading verses, alternating between the slower style of the original and slightly poppier presentation of Taylor's version. Live At The Troubadour closes with a full duet on "You Can Close Your Eyes", a simple celebration of life and love and of making the most of the moments that find us.

Given the collective track records of Carole King and James Taylor, you'd expect the performances on Live At The Troubadour to be professional and well-done. What's harder to predict is whether the chemistry they had almost forty years ago would return. Suffice it to say that Live At The Troubadour is all you could want and more. King and Taylor play their classic songs with a musical repartee that is downright magical. Both voices show the normal wear and tear that forty-plus years of singing will bring about, but if either has lost anything over time they have more than made up for it in their craft and persona. When they step on stage together, however, it's as if the years fall away, even if for a little while. If you were lucky enough to catch Carole King and James Taylor the first time around then Live At The Troubadour will bring you back to those days. If not, then the album serves as a looking glass into the distant past, when the high arc and inevitable downfalls of stardom still lay before each. Live At The Troubadour is not just a live collection of two iconic artists' best material; it is a testament to the magic that great performers can weave.

Rating: 4.5 Stars (Out of 5)
Learn more about James Taylor and Carole King at http://www.troubadour-reunion.com/. Live At The Troubadour is available as either a CD or Download from Amazon. Digital copies are also available from iTunes.
Posted by Wildy at 5:10 AM