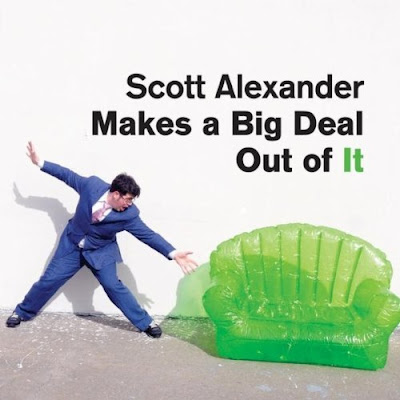 Scott Alexander is at it again. The New York City singer/songwriter who’s at least as well known for his music as for his impromptu cookie handouts returns with Scott Alexander Makes A Big Deal Out Of It, furthering his eclectic and at times bombastic songwriting style. The album caps off a big twelve months for Alexander, which included the release of his EP, Scott Alexander Makes 7 or 8 Dollars and his national television debut on “The People’s Court”.

Alexander opens with "A Price", laying out the cost of individuality in a society that values it as long as you don't stand out. The sound here is very reminiscent of the solo work of Kevin Hearn (Barenaked Ladies). "Everything Is Complicated" features Jessica Teague on vocals, showing off a voice that's comely by any standard. The song sounds like something from an off-off-off-Broadway show; an odd amalgam of jazz and highly dramatic show tune that explores the dichotomies and disparities of everyday life in highly dramatic fashion. With "Special Effects", Alexander explores love and its effects in a folk/punk form reminiscent of the Violent Femmes. "Why Are You So Horny? and "Independence And Love" seem to find Alexander a bit off track in that land where irony and humor briefly diverge, but his cover of "Bad Reputation" (Joan Jett) is a humorous mix of Alexander's voice and saxophone (and nothing else) and is highly entertaining in the same way that the insecure protestations of a teen might be to an outside observer (think "Weird Al" Yankovic without a budget). The album closes with a studio version of "You Are Not A Market", previously released in an "Attic Version" on the recent Scott Alexander Makes 7 or 8 Dollars EP. Alexander includes that EP on the full length CD as a bonus for those who still like hard copies of their music.

Scott Alexander inhabits the strange twilight between serious social observer, novelty musician and brilliant self-marketer that includes people such as, well... Scott Alexander. There's really no one like him in popular music. I don't suspect that will change, but I also do not suspect Alexander will ever stop creating his curiously intriguing ditties that mix social confusion, angst, post-suburban anger and wit with a talent for writing lyrics that grab your attention in surprising ways. Sometimes he'll make you laugh; sometimes he'll remind you of the kid who got pushed into lockers in junior high, but either way you'll remember Scott Alexander.

That's half the battle.