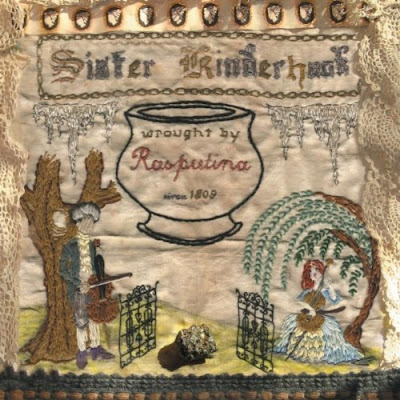 Rasputina returns on June 15, 2010 with Sister Kinderhook, their 6th studio album and 9th overall. The Brooklyn cello-driven trio has been kicking around since 1991, coming to the attention of Sony Records in 1996. Since returning to the Indie side of The Force, Rasputina have continued to create eccentric Baroque-Folk driven by anachronistic vocal harmonies and cello-led arrangements. Rasputina's supporting character continue to (r)evolve, but Melora Creager continues at the core for Sister Kinderhook; an album that is all that any Rasputina fan could ask for. The songwriting is tacitly obscure, delving into deep historical and political references that in and of themselves will be unfamiliar to all but the most learned listeners, but in theme serve as practical parables for today.

Rasputina kicks things off with the dark and ethereal "Sweet Sister Temperance", bringing in a wealth of antiquated instrumentation to support what is musically a dark theme. "Holocaust Of Gnats" borders on magical, revisiting the fields of childhood to find them gone or changed. Biblical references to giant beasts may seem to imply the corporate world, as Rasputina chides society for continuing to act as if their choices do not affect the world around them (and ultimately themselves). "Calico Indians" is a political commentary on slavery 165 years in the making, and in spite of its age remains remarkably instructive for today.

"Snow Hen Of Austerlitz" finds Rasputina at their most lyrically deep, delving deep into a mythical story perhaps inspired by Jostedalsype. It is one of the grander arrangements on the album, done with theatrical attempt but in the low key, hand-hewn style that Rasputina affects. "Utopian Society" is a spoken word piece that references slavery and seems to dovetail with "Calico Indians". "Afternoon Of The Faun" is perhaps the prettiest piece on the album, but does get caught up a bit in repetition. Sister Kinderhook closes with "This, My Porcelain Life", the closest thing to a rock/pop turn on the album.

Sister Kinderhook is a stark and lovely return for Rasputina; long time fans will be thrilled. You definitely have to be on the same wavelength as the band for this recording. Rasputina does require some stamina from those unfamiliar with the sound, but the effort is worth it. Sister Kinderhook deserves your attention.

Rating: 3 Stars (Out of 5)
Learn more about Rasputina at http://www.rasputina.com/ or www.myspace.com/rasputina. Sister Kinderhook drops on June 15, 2010. You can pre-order the album as either a CD or Download from Amazon.com. A vinyl edition will be available on June 22, 2010.
Posted by Wildy at 5:00 AM

It can't work in reality, that's exactly what I think.