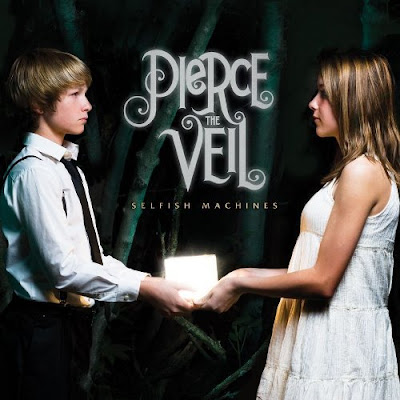 San Diego post-hardcore icons Pierce The Veil return on June 22, 2010 with their sophomore album, Selfish Machines. Produced by Mike Green (Paramore, Set Your Goals), Selfish Machines represents artistic and personal growth for the band that rose to national recognition on the basis of their 2007 debut A Flair For The Dramatic and lauded slots on the 2008 Vans Warped Tour and 2009 Taste Of Chaos. After touring non-stop for two-and-a-half years, Pierce The Veil took some time off last year to write. Selfish Machines represents the fruit of their collective labor, a breakup collection of twelve highly personal and dynamic songs that cements Pierce The Veil's reputation as serious rockers and establishes them as a serious songwriting collective as well.

Changing directions for a band is always a risky venture. Some fans will turn away, new ones will come, and the term "sell-out" is thrown around far too liberally in a business where the point is to sell tickets, CDs, downloads, etc., but change is a part of artistic growth. Pierce The Veil accomplishes change in multiple directions on Selfish Machines, some more successfully than others. Opening with "Besitos", Pierce The Veil takes us on a wild ride full of big sound and high emotions. Incorporating piano for the first time broadens the band's sound spectrum, and "Besitos" has a dynamic level that will play well to radio. "The Boy Who Could Fly" has a heavy, melodic sound that is very appealing with hammer-on guitar work worth of a Van Halen. It's a dazzling musical display. "Caraphernelia" is a bit more generic, adhering to the sort of sound propagated by modern rock radio.

"Fast Times At Clairemont High" is a great tune, featuring piano (again) and a sing-along chorus that should make this a concert favorite. "Bulletproof Love" is a song of heartbreak that's very radio-friendly. Pierce The Veil makes a lyric stretch here with a big, melodic chorus. One of the complaints about the "new" sound is vocalist Vic Fuentes’ tendency to sound whiny on some of the slower vocal lines. This is most apparent on "Stay Away From My Friends", a power ballad pleading for his ex-girlfriend to stay out of his inner circle. "I Don't Care Contagious" captures all of the anger and recklessness of a post-breakup self-destructive streak. Pierce The Veil loses momentum with "Disasterology" and "Million Dollars Houses (The Painter)", with Vic Fuentes sounding more like Blake Lewis than a serious vocalist on the latter. The band closes strong, however, on "The Sky Under The Sea", returning to the big rock sound that helped them be in a position to create a second album.

Selfish Machines succeeds more often than it does not, but in expanding their musical reach, Pierce The Veil needs to take into account the limitations Vic Fuentes has as a vocalist. This is not a knock on Fuentes; almost every vocalist has limitations or least styles or parts of their range they don't sound as good in. Fuentes manages to be featured in a few uncomfortable spots on Selfish Machines, but the overall impression is a good one. Some growing pains are expected in a band's sophomore effort, but Pierce The Veil appears to be weathering band adolescence nicely.

Please note that the Amazon.com prices listed above are as of the posting date, and may have changed. Wildy's World is not responsible for price changes instituted by Amazon.com.
Posted by Wildy at 5:10 AM

Hi, just passing by your site to see something that will interest me and luckily you impressed me with your great article and I have a great time reading everything that is written. I'm looking forward to see more of your write-ups. If you have time you can also visit my site which indicated below.