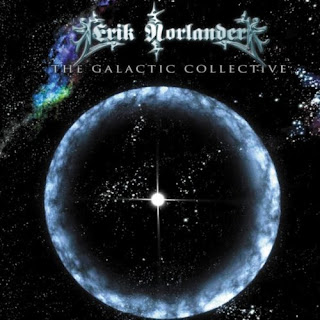 Erik Norlander - The Galactic Collective
2010, Chian Productions
You may know Erik Norlander as the keyboardist/spouse of Lana Lane or from his work with Rocket Scientist or even Asia With John Payne. The list of artists Norlander has recorded with or produced/engineered is too long to list here. With influences ranging from Rick Wakeman and Keith Emerson to Jeff Lynne and Alan Parsons, Norlander draws from a rich musical history to create compositions with a classic feel and fresh energy. Norlander recently released The Galactic Collective, his 8th solo album and 33rd overall, Norlander builds on an impressive body of work.

The Galactic Collective opens with “Arrival”, a brief musical prologue that’s more atmosphere dark, plaintive atmosphere than anything else. “Nurosaur” dances on the edges of gothic and baroque progressive rock; a big, heavy sound with a chorus at the opening becomes a rambunctious Prog gem. “Fanfare For Absent Friends” is an over-the-top announcement with a martial feel. Driving guitar and heavy rhythms grow into a more space-age rock sound. The most intriguing composition on the album is “Astrology Prelude”, a musically violent and complex world of musical ideas and action beneath the surface that occasionally resolves into a relatively peaceful and melodic passage before falling back into its own driven nature.

Norlander gets a bit repetitive with “Trantor Station”; The highly rhythmic nature of this synth-driven song becoming as much of a liability as a benefit. “After The Revolution” is laden with arpeggios, alternating with passages marrying synth fills and rhythmic guitar ambience. The song seems to depict struggle amidst a tide of change, and begs for a vocal line. At twelve minutes, “After The Revolution” simply runs too long, becoming nothing more than a Prog rock jam that recycles itself to fill out the space. “Garden Of The Moon” starts out with an intriguing theme, but ends up sounding like incidental score music. Norlander gets to show off his raw piano skill on "Dreamcurrents", a master class in speed and precision on a solid, classical-style composition. Norlander closes with “The Dark Water”, a twenty minute collection of variations that’s probably 10-12 minutes too long.

Progressive rock is a double-edged sword. Some of the most talented and musically complex artists gravitate there because of the stylistic mix of jazz form, classical composition and rock energy and glamour; but like jam-based music, progressive rock lends itself to the conceit of doing too much and going too far. Norlander crosses this line a few times on The Galactic Collective. That being said, it is an ambitious and expansive album. Where Norlander loses himself it’s not for being mundane, but simply trying to push the envelope too far. It’s much preferable to hear an artist push too far than become mundane through not pushing enough. There’s enough really great material here to make The Galactic Collective worthwhile, and even where Norlander over-steps there is much you’ll care to hear.

Rating: 3.5 Stars (Out of 5)
Learn more about Erik Norlander at http://www.eriknorlander.com/ or www.myspace.com/eriknorlanderandlanalane. The Galactic Collective is available on CD from Norlander's web store. Digital versions are available from Amazon and iTunes.
Posted by Wildy at 5:10 AM