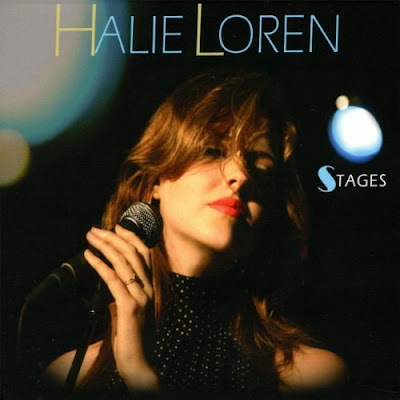 No matter how vibrant the performer; no matter how talented the producer, it's simply not possible to get the full power of a live show into a studio recording. Even one-off sessions with no overdubs fail to get the whole aural picture on tape. This seems an important consideration as I sit here listening to Wildy’s World Artist Of The Month for June, 2010 Halie Loren's newest album, Stages, recorded during 2009 at two different venues in Oregon. Loren has an amazing voice, warm and sultry in a way that recalls the Great Ladies of Song. That voice has always been apparent on her albums Full Circle and They Oughta Write A Song, but if you want to be blown away, grab a copy of Stages and get comfy.

Stages opens with "Danger In Loving You", a virtuosic opening that recalls names like Etta James, Sarah Vaughan and Billie Holliday. Loren has the innate ability to sell a song like she's lived it, making the experience so real that listeners can lose themselves for a moment. "On A Sunny Afternoon" is to the same level, but allows Loren's band to show off a bit. Particularly notable here is pianist Matt Treder, who brings the backdrop alive with a piano part that's so vibrant it's practically alive. Loren's take on U2's "I Still Haven't Found What I'm Looking For" sounds as if it might have been arranged by Hoagy Carmichael; keeping the essential melody intact but taking some mixolydian liberties in the process. On this tune in particular Loren sounds like a cross between Norah Jones and Sade, offering a soulful twist on her warm alto.

"More" starts out in a 1970's singer/songwriter pastiche before turning into a classic cabaret tune. Loren waxes poetic on her perfect love and questions whether her current love matches up to the ideal. The song alternates between a dreamy, pensive chorus and upbeat, jaunty verses and sounds like it might have come from a stage show. Loren really digs in on the classic "Cry Me A River", leaving goose bumps in her wake. You'll walk away thinking you finally heard the song as Arthur Hamilton originally envisioned it as he put pen to paper. Loren's take on Antonia Carlos Jobim's "The Girl From Ipanema" is lighter fare but no less inspired; capturing the carefree feel of the original.

On "Free To Be Loved By Me", Loren has a magical moment. Back in singer/songwriter mode, Loren delivers a tune that could have been a top-10 pop hit in the mid-1970's, and might still take the charts by storm in a country arrangement in today's marketplace. It's a brilliant tune, and plays exceedingly well live, where Loren sells it like a Tony-winning actress. Moving quickly to pick up the pace, Loren and band launch into Louis Jordan's "Is You Is Or Is You Ain't My Baby", done in a peppy, syncopated arrangement that will have your toes tapping from the outset. Loren shifts once again into "Great Ladies Of Song" mode for "Love Me Like A River Does", offering a textured, nuanced and ultimately beautiful vocal performance. Bassist Mark Schneider provides rhythmic and musical support with a line that stumbles, and then walks as Loren asks for it all. Pianist Matt Treder fills around them like the air we breathe, creating an amazing ensemble that's as in-sync for the three and a half minutes of the song as it’s possible to get.

Loren's "They Oughta Write A Song" has the sound of a classic jazz vocal tune, but is a Loren original. It's the title track of her last studio album, which was recently released in Japan by Victor Records. Loren's performance here is flawless. "High Heel Blues" offers a moment of whimsy as Loren sings about the draw a great pair of shoes can have, and the afflictions caused by a good pair of high heel shoes. It's a Capella blues and a real connection with the crowd that happens to allow listeners to hear the full tone and color of Loren's voice devoid of surrounding instrumentation. After such a diversion, you'd expect a song of impact. Loren chooses "Summertime", one of the best known songs in the Gershwin catalogue. This one's been done so many times it can either be a safe choice or a disastrous one. There are enough great versions of "Summertime" out there to make anything less than magic seem mundane. Loren delivers with a warm delivery and an understated read on the tune that eschews the histrionics many modern singers try to inject into the song. Stages closes with gentle calypso of "Rainbow Race", a song about the need for all peoples to get along and live together. It's a sweet tune, a fitting concert close with a gentle social message but light enough to end the show on a bright note.

Haley Loren continues to grow and develop as an artist, and she's seeing the fruits of her labors. Her previous album, They Oughta Write A Song, recently crested in the top-20 albums in Japan. It's only a matter of time before Loren sees the same sort of numbers on this side of the Pacific. It's already reached a point where if you want to talk about the best female jazz vocalists working today, a discussion that doesn't include Loren in the mix is incomplete. Stages is brilliant, capturing Loren in a live setting, where the warm textures of her voice and her pitch-perfect phrasing blend with a band that supports her flawlessly. Halie Loren is the sort of vocalist who comes along once or twice a generation, combining technical ability, sound, passion, sensuality and a natural ability to connect with listeners; she creates magic on stage, as on Stages. Stages is a Wildy's World Certified Desert Island Disc.

Rating: 5 Stars (Out of 5)
Learn more about Halie Loren at http://www.halieloren.com/ or www.myspace.com/halieloren. You can order Stages and any of Loren's other albums on CD through her website in the store section. You can also order the album as either a CD or Download from Amazon.com.
Posted by Wildy at 5:20 AM