Review: Pictures Of Then - And The Wicked Sea 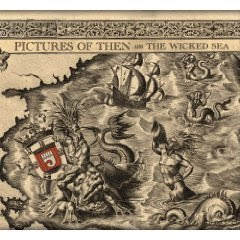 And The Wicked Sea is mostly successful musical experience with some amazing moments. The Big Sell is a great bit of Brit Pop with a strong melodic sense, outstanding harmonies and some very interesting guitar work. This song is highly commercial without trying to sound commercial. Nowhere Is Somewhere is a piano-driven Pop tune that gets to the idea of what love is all about. 7th Street is one of those songs that if released 25 years ago would have bought each member of The Wicked Sea a mansion they couldn't dream up. The melody here is highly memorable and has great movement and rhythm all throughout the arrangement presented here. History Of Bones is my favorite track here; a philosophical look at how day-to-day details are often more significant than they might seem at the time. The song is wrapped up in big hooks and a Pop sensibility that indicate significant commercial potential. Wicked Sea is a funky mix Rock N Roll with lyric passages and Ooh-La-La harmonies and is a real pleasure to listen to. The album closes out with some Ambient Rock on Lands Uncharted, and epic story in song wrapped around an impressive piano part.

Pictures Of Then have managed to create a highly memorable CD in And The Wicked Sea; distinguishing themselves from the pop pack with original songwriting and real knack for big hooks and turns of phrase. This is the sort of album where a band really consolidates their sound and their fan base. With the right breaks, Pictures Of Then could be a household name. Check them out!

You can learn more about Pictures Of Then at http://www.picturesofthen.com/ or www.myspace.com/picturesofthen. And The Wicked Sea will be released August 4, 2009. You can pre-order copies of the CD through Amazon.com. Expect the album to be available through multiple digital outlets as well.
Posted by Wildy at 6:14 AM

Labels: Britpop, MTV, Pictures Of Then, The Hills, The Real World

Easily one of the best indie pop bands in the MSP scene at the moment. I can't wait for my pre-order to arrive.

Love these guys, saw them this year at Summerfest in Milwaukee - they were amazing! Definitely worth checking out.

Just heard these guys play @ the Des Moines Art Festival...it was seriously AMAZING!!! You will LOVE this new album! I just got mine after pre-ordering it, and it's awesome! Tom