Review: The Darbuki Kings - Been Laden You Too Long 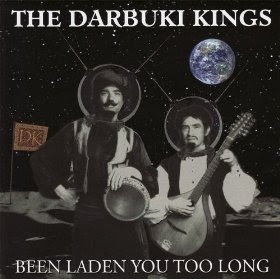 Robin Adnan Anders (aka Adnan Darbuki) and Antonio Albarran (aka Antone Darbuki) are the Darbuki Kings. Last year we had the distinct pleasure of reviewing their album Lawrence Of Suburbia, which rose as high as the Top 20 on the CMJ New World chart. For 2009, The Darbuki Kings are back with Been laden You Too Long, a collection of 10 folk songs infused with exotic melodies and eastern influences. Some of you may know Anders from his other lives as founder of both Boiled In Lead and 3 Mustaphas 3. If you're familiar with either of those bands I can assure you that the creativity and adventurous musical spirit you're used to carries over to the Darbuki Kings.

Been Laden You Too Long opens with Berber, which sounds like the sort of music you might hear at the opening of a big Arena Rock concert. The mix of orchestration and electric instruments creates a tapestry against which the dark, minor-key, Middle Eastern style melody can have its fullest effect. The instrumental plays out at nearly six-and-a-half minutes and is very vibrant and full of energy. Zimbob Wayout sounds like it could be an instrumental outtake from Paul Simon's Graceland sessions, even capturing the same guitar sound/style. Mango Tango sounds like it shares musical ancestry with Hernando's Hideaway; it's full of rhythmic and melodic surprises that will keep your interest throughout.

The Breath Of The Cobra is a highly rhythmic composition that has almost jazz-style improvisational feel to it. Anders and Albarran play inspired music here across nearly 8 minutes, wrapped around an enduring theme that never goes fully away. Eleven Monkeys is a bit more upbeat and brighter, relying on traditional western scales, but the Kings don't stay there long, going for dark and effecting on Gilgamesh. This song features some of the most dynamic electric guitar passages on the disc and is sure to be a crowd pleaser when performed live. Zanzibar makes the full transition into Bedouin Jazz with a long and distinctive improv-style composition. The musical madness continues through Tunisian Wind and Corinthian Slap and on the final track, Anderslusian, The Darbuki Kings provide the most entertaining track on the CD.

The Darbuki Kings have found a winning combination of traditional sounding Middle Eastern music and jazz on Been Laden You Too Long. While the music presented here is never going to get The Darbuki Kings on Top-40 radio, it is of the quality to gain them significant respect within the music industry, had they not had it already. I highly recommend Been Laden You Too Long.

You can learn more about The Darbuki Kings at http://www.robinanders.com/ or www.myspace.com/darbuki. Been Laden You Too Long will be released on June 30, 2009. You can pre-order a download through Amazon MP3. Information on CD availability could not be found as of the publication of this review, but keep checking Adnan’s Marketplace for availability.
Posted by Wildy at 5:10 AM

This was my frist CD from the Darbuki Kings and i am a forever fan now. these guys are amazing on the disc but universally mind blowing in person! i love the Darbuiki Kings!