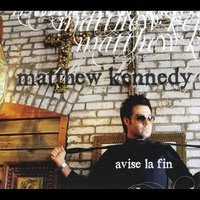 Matthew Kennedy, born in Zimbabwe and raised in South Africa, found his way to America as a member of Christian band Khanyisa. After touring the US, Europe, Africa and Asia the group disbanded and Kennedy relocated to Los Angeles. From this musical high Kennedy quickly descended a dark road into drug and alcohol addiction. After his debut solo CD, Makes Me Alright, Kennedy re-examined his life and re-connected with his faith. These personal changes bred others, with Kennedy regaining control over his life. Kennedy's sophomore CD, Avise La Fin, consists of eleven songs informed by faith and hope. The title, taken from the Kennedy family crest (Consider The End), informs the philosophy that runs throughout the album.

The first thing that struck me about Kennedy is how much he sounds like Bono at times; indeed, about half of the music on Avise La Fin sounds like it could have been drawn from mid-career U2 sessions of the 1990’s. The album opens with Sing, a dark and edgy pop tune full of a hopeful, almost joy emerging from darkness. Salvation In A Box starts the serious U2 references with a soaring rocker featuring the sort of big Chorus Bono and the gang are known for. Kennedy hits potential radio gold with You Are Beautiful, another big soaring rock song with the sort of hooks that keep a song on the air for months. Say may be the best balanced song on the album, full of a melancholy feel and an infectious pop hook. Pick Up has a mellow vibe but strives to be a big pop/rock tune. Kennedy manages to make it soar in spite of the very relaxed feel to the song.

Like many albums, Avise La Fin gets a bit thin in the late going; the last few tracks are pleasant and well-written but just not up to the level Kennedy hit on the first 2/3 of the album. Avise La Fin reflects a more mature artist in Matthew Kennedy; one who has grown from his past misadventures, overcome personal obstacles, and learned to look at life through his songwriting rather than using his songwriting as a means to see things. Avise La Fin is a wonderful mix of dark and light with strong songwriting and the tremendous vocal performances Kennedy gives while pouring his heart into each song. It’s a definite keeper.

You can learn more about Matthew Kennedy at www.myspace.com/matthewkennedy. You can purchase a copy of Avise La Fin at www.cdbaby.com/cd/matthewkennedy2, or you can download the album from iTunes.
Posted by Wildy at 5:37 AM