Review: Amy Speace - The Killer In Me 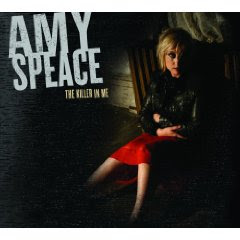 Amy Speace - The Killer In Me
2009, Wildflower Records

Amy Speace; Former Shakespearean actress, teacher, playwright and theater company director, releases her third album, The Killer In Me, on June 30, 2009. To say that Speace has had success in most any creative endeavor she’s involved herself in is modest. She spent two years with the National Shakespeare Company and performed in various Off-Broadway shows. Speace also spent time teaching Shakespeare in the New York City Public School system before getting turned on to performing music with her first band, duo Edith O. Speace went on to release the critically claimed Songs For Bright Street in 2006 and takes a giant step forward with The Killer In Me. Produced by James Mastro (Health & Happiness Show, The Bongos), The Killer In Me is the sort of album that vaults an artist into the national consciousness.

Speace opens the set with Dog Days, a lush Country/Rock tune with a sparse presentation that allows Speace's dusky alto to shine for all its worth. It is a fitting opener for an album that should see a lot of airplay and sales over the course of the coming summer. The Killer In Me is a dysfunctional relationship song that turns out to be just a relationship song. The narrator lays out all of her faults and matches them to her partner's, to point out that for whatever differences they might have they are essentially the same. Better takes a very different tack, looking at all of the better options that might be available from the perspective of someone in a hopeless relationship; Better is her last warning to the guy who doesn't know what he has.

Blue Horizon takes on unplanned events that sometimes interrupt our lives or aspects of them, and the unsuspected opportunism they might offer. The song is very well done; highly melodic with a lush-yet-sparse arrangement. Haven't Learned A Thing is a song about missteps and mis-directions along the path of life; a sad and beautiful musical soliloquy that's about as bare as a song can be. Speace reminds me a great deal of Emily Saliers on this tune. Storm Warning tells the first-person story of a woman whose husband dies at war. The tune is stark and raw, reflecting the disconnected understanding of grief that is shock at a traumatic loss; some of Speace's best songwriting. Would I Lie is a song about human nature that Johnny Cash would be proud of. Speace walks the line between Country and Rock in true outlaw style. Dirty Little Secret is an intriguing song; it's never entirely clear what the secret is, but comes round to the narrator wondering if she's good enough for someone who doesn't even see what's going, is she good enough for herself? It's quite a stunning song and not your normal rock fodder; and rock this one definitely is. It's a superb bit of songwriting and the sort of song that could break out as a rock hit. Speace gets a bit traditional on I Met My Love, sounding like she's blasting right out of a 1960's country radio station playlist. Piece By Piece is a serious country ballad that would do very well on commercial Country radio. The vocal here is precise, warm and downright mesmerizing, and the overall arrangement leaves little to be desired.
Speace then goes on to hit listeners with a ton of bricks on Weight Of The World; a presumably autobiographical song about losing a brother in war. The song is all about how life went on while he was away, and the unfairness of such a young man bearing the weight of survival as well as keeping his family from worrying about him; carrying all of those worries alone. In the final verse we learn the brother dies away from home, and comes home a hero to a half-mast flag. It's a gut wrenching song that lays out the personal price of war in a way few other songs could do. Speace has outdone herself here.

Ditto for the album, Speace has outdone herself. Writing from an emotionally charged well of creativity with the precision of surgeon and the artistic voice of a master, Amy Speace takes listeners on a journey of love, loss and struggle to carry on throughout The Killer In Me. As much as we enjoyed her previous disc, Songs For Bright Street, The Killer In Me is a major step forward as a songwriter and performer. Speace is one of the brightest songwriters in popular music, irrespective of genre. The Killer In Me is an indispensable listen; a Wildy's World Certified Desert Island Disc.

You can learn more about Amy Speace at http://www.amyspeace.com/ or www.myspace.com/amyspeace. The Killer In Me will be released in the US and Canada on June 30, 2009. Expect distribution through Amazon and major retailers, with digital distribution through outlets such as iTunes and Amazon MP3.
Posted by Wildy at 5:20 AM