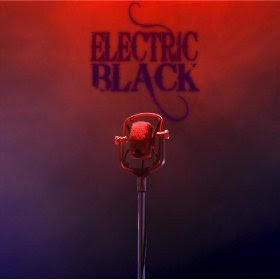 Electric Black is a New York City sextet (their bio says there are five members and then goes on to list 6…) that cooks up some musical madness on their self-titled debut, Electric Black. Drawing from rock, blues, country, folk and even classical styles, Electric Black scrawl across the musical landscape in a way that seems haphazard but is in fact meticulously planned. The band is as conscious of their musical construction as can be, developing musical imagery that equals or surpasses that of their lyrical side. Formed in 2008, Electric Black has already generated something of a following in New York, and has managed to make an appearance on Fuse TV even before their album came out.

Imagine for a moment if Tom Waits, Big Rude Jake and The Crypt Keeper were genetically combined to create a lead singer and songwriter. The results might sound an awful lot like Johnny B. of Electric Black. Down and dirty blues-based rock is the story of the day, starting out with Our Love Is Smoking. Heavy tremelo/surf guitar sounds mark out a sound that's part 60's rock, part blues and part coffee-house madness, all of which pervade Electric Black's self-titled debut. Penitentiary Soul is the class of the album, riding the rough side of Blues in a song that will appeal to fans of Big Rude Jake or Ron Hawkins. Electric Black gets it right on the traditional country styling of Reign The Night. Then something happens. The second half of the album I had a very hard time connecting with, culminating in a version of I'm So Lonesome I Could Cry that should live in infamy. It's not a distinctive difference in the songwriting style that seems to fuel the musical fall to earth, but perhaps just a different level of enthusiasm in the songwriting process.

Electric Black is an interesting study. If the first four or five tracks had been released alone on an EP and that's all you heard, you'd be convinced you'd found the next big thing in Rock n Roll. The rest of the album belies any confidence you might have in that concept, but it's nevertheless clear that Electric Black is a very talented group with some real songwriting potential. Check them out!

You can learn more about Electric Black at http://www.electricblack.org/. You can purchase a download of the Electric Black through Amazon MP3. At this time no online outlet can be found for the CD version of Electric Black. Electric Black’s website has a store link but it does not appear to be operational yet. Keep checking back if you’re like me and still holding out for last century’s technology!
Posted by Wildy at 6:00 AM