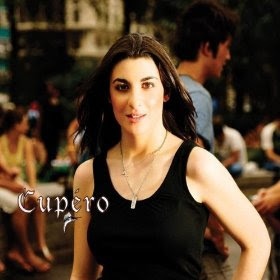 Warwick, NY native Clarissa Cupéro just bowled me over. Cupéro's self-titled 6-song EP is the sort of introduction that knocks a listener off their feet. Whether it's the distinctly mature tone of 19-year-old Cupéro's songwriting, the no-holds-barred emotional strength of her songs or the absolutely amazing instrument that is her voice, Cupéro is a purely unexpected and welcome surprise on the musical scene. The Siena College student has influences all over the music map, from KT Tunstall to various classic rock artists to Columbian rocker Juanes (17 Latin Grammys). Juanes has inspired Cupéro to be a bilingual artist, writing and singing in both English and Spanish. The EP, Cupéro, was produced by Patrick Ermlich and E-Shy Gazit, who brought Cupéro's songs to life in ways even she didn't suspect when she contacted them as a high school senior. Now, Cupéro is a college student trying to build her fan base in the Albany, NY and New York City markets who has her eyes on bigger stages down the road.

Those bigger stages shouldn't be a problem at all. Not since Marian Call came along with Vanilla have I been so utterly stilled by a debut album. Cupéro makes you want to just drop everything and listen, and she handles active rock tunes and ballads with equal aplomb. With a voice that falls somewhere on a line between Sarah McLachlan and Bonnie Tyler, Cupéro makes fans every time she opens her mouth to sing. Cupéro opens with I've Got Your Number, a song she wrote for a high school talent show that has become her signature song. I've Got Your Number could have been a hit anytime in the last 25 years, and with the right breaks would vie for radio spins even in today's fractured market. La Sombra is a Spanish language song, and while I can't comment on the lyrics (no habla), the song has a powerful, sensuous feel that borders on overwhelming. Cupéro rips the roof on this vibrant rocker.

I Thought I Knew Love is a commanding love song that's chart ready as you read this. It's a bit off the beaten love song track but ideal mix-tape material and the sort of song that lights up request/dedication lines. Life Is A Moment is a song about striving for dreams and never giving up. It's a powerful message delivered in a powerful vocal performance. The arrangement opens with Cupéro and piano, adding in cello and other instrumentation as the song progresses. There's a Paula Cole "I Don't Want To Wait" feel to this song that's unmistakable. Don't be surprised if Life Is A Moment ends up licensed, movies or even gets covered by big name artists down the road (by then Cupéro may be one herself). Quiero Tu Amor is the other Spanish language song on the EP, a gorgeous ballad that would sell a million copies in an English version. I have to say though that the Spanish language brings out a certain sensuality in Cupéro's voice that's more reserved in English, increasing her marketability in an increasingly multi-ethnic culture a hundred fold. Cupéro closes out with You'll Never Be There, an urgent acoustic rocker with Americana leanings that just about proves that she can do, play or sing almost anything.

Clarissa Cupéro has everything but the breaks. Talent and composure well beyond her nineteen years and a killer voice make it very possible that down the road the name Cupéro will be as familiar as names like Prince, Madonna and Beyonce. Yes, it's a grand statement, and practically everything in Cupéro's life and career would have to go just right for that to happen. But based on what I've heard on Cupéro, it's not out of the realm of imagination. Yes, she's that good. Find out for yourself. Cupéro is a Wildy's World Certified Desert Island Disc. Don't wait, get it now.

You can learn more about Cupéro at http://www.myspace.com/cupero or http://www.cuperomusic.com/. You can download a copy of Cupéro through iTunes or through Amazon MP3. I don’t have any word on CD distribution at the time of publication, but will update with links when/if they become available.
Posted by Wildy at 6:23 AM