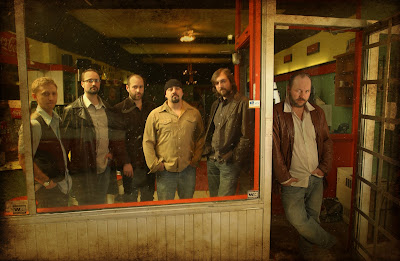 I had the distinct pleasure to be invited to a private performance by Jason Plumb & The Willing at the home of Bob & Maureen Orrange this past week. This is the first time I had seen Plumb on his own, as my past concert experiences with him had been as lead singer for Canadian Indie faves The Waltons. This was a small house concert with perhaps 40 attendees, but the audience was more than enthusiastic enough to make up for its size. Jason Plumb was self-effacing and humble before, during and after the show, indicating that this constituted something of a live rehearsal for the band for a series of dates in June in Ontario. You wouldn’t know it was a rehearsal from the performance, Plumb & the Willing were spot on right from the opening notes of Starlight, Starbright. In spite of taking most of the first song to get all the levels worked out in that small space, Plumb gave an affecting performance of one of the more optimistic songs in his songbook. Plumb and The Willing sailed through I Do and The Middle Of Nowhere, noting that it was only the second time the band had played the latter (you’d never know).

Plumb launched next into Satellite after talking briefly about writing the song with Ed Robertson of Barenaked Ladies; he was in perfect voice here, and it was very clear that The Willing were clicking on all eight cylinders. Up next was Neil Young’s Tell Me Why, in arrangement Young himself would have stood up and saluted had he been in attendance. Perhaps the biggest Wow! moment of the show came on Rubbing Off, done up in a country arrangement that was absolutely amazing. The Willing gave heartfelt readings of Heartless and Wascana (a house favorite, particularly of diminutive co-host Jess), before breaking into one of my favorite Plumb tunes, Protest Song. Wrapped into the middle of Protest Song was Plumb’s earliest hit with The Waltons, Colder Than You; at the transition you could see smiles light up on the faces of those in attendance. The Willing returned to Protest Song before launching into Drive, the first single from Plumb’s latest disc, Wide Open Music: Songs For Saskatchewan. Guitarist Dan Silljer almost stole the show here with a wicked guitar solo. Plumb closed out the night with a cover of The Jayhawks’ Blue.

Jason Plumb is one of those performers who aren’t consumed by fame. He makes music because he loves making music; he writes songs because he needs to. Anyone who’s followed him for any length of time knows he’s one of the best songwriters working in popular music. The quality of his work his drawn to him an amazing band in The Willing, consisting on this night of Dan Silljer on guitar, Gord Smith on bass, Mike Thompson on drums, Jeff Mcleod on accordion and piano, Cody Gamracy on guitar and a new violinist named Carmella (I didn’t catch her last name). It was a night not to be missed (even though I almost did), and bodes well for anyone seeing Jason Plumb And The Willing this summer. If you are in the vicinity of one of his shows, make sure you don’t miss it!
The show was opened by Buffalo’s own McCarthyizm, who put on quite a performance of their own. Highlights were something that co-host Jess kept referring to as “The Pub Song” and Mt. St. Michel, from their 2001 album Pair O’ Docs.

Check out our reviews of Jason Plumb & The Willing’s most recent album, Wide Open Music: Songs For Saskatchewan, as well as their previous album, the exquisite Beauty In This World.