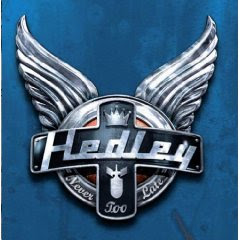 Hedley has the sort of back story most bands dream of. The band originated in a small town in British Columbia called Abbotsford, taking their name from another British Columbia town that was for sale for $346,000. The band bet their lead singer, Jacob Hoggard that he wouldn’t audition for Canadian Idol. The rest, as they say is history. Hoggard went on to place third in the 2004 edition of Canadian Idol, and with a reconstituted Hedley has gone on to release two platinum albums in Canada (Hedley and Famous Last Words). Now U.S. audiences get to hear Hedley for the first time with a collection of singles and songs from those two platinum albums entitled Never Too Late. This album was previously released in Europe (2008).

Hedley brings a sound that’s pure modern rock radio sound but does take the occasional detour. Starting out with She’s So Sorry, a high energy rocker with strong pop/radio sensibilities. Big hooks and a catchy chorus mean this song will have serious commercial legs. 321 is built around some unusual guitar progressions that get your attention but almost derail the song in a couple of spot. The tension created there certainly does intrigue, but this song might be a case of trying to squeeze too much into a small bit of music. For The Nights I Can’t Remember is a great Rock N Roll song, a former #1 AC Single in Canada and Top-Ten overall. Hoggard is at his vocal best here, and the harmony vocals come off sounding almost like an old Eagles record.

Never Too Late is another former Top-10 single and has a Reggae/Rock vibe with a highly commercial sound. The guitar work in this song is notable and would be fun to pick apart and learn for anyone who plays. On My Own is the song that started it all for Hedley (post-Idol). Originally released in Canada back in 2005 the song shot to #1. It is a solid Modern Rock/Pop song that perhaps was driven to #1 as much by Hoggard’s then-recent stint on Canadian Idol as anything else. Old School is another former Top-10 Canadian single; this one fits Modern Rock formats perfectly, although is perhaps a little too stereotypical of the genre to stand out. It’s a decent song but didn’t floor me. Far and away the best song on the album is Narcissist; a high-energy rocker with Punk anger tempered by a modern cynicism. Narcissist is worth the price of the disc on its own.

Hedley has risen quickly on the back of Hoggard’s exposure on Canadian Idol. Unlike the big rocker from the US version, Daughtry, Hoggard and Hedley have stayed with a more big rock sound (whereas Daughtry has gone more toward the repressed Emo/Rock/gloominess that seems to haunt American rock radio these days). Hedley should do well in the US market with Never Too Late, although it’s a shame that Fontana waited this long to release an album here. Never Too Late is a strong effort. We’ll be curious to see how Hedley develops from here; whether they stick with the formula they’ve written in for their first two albums or whether they branch out over time.

You can learn more about Hedley at www.myspace.com/hedley. You can purchase a copy of Never Too Late at Amazon.com or download the album through iTunes.
Posted by Wildy at 6:24 AM