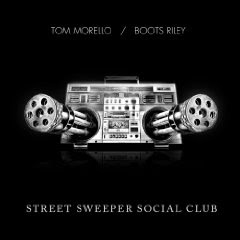 Dateline: 1986. Rock superstars Aerosmith release a groundbreaking single and video, reprising their hit Walk This Way with the help of Run DMC. While there are perhaps other examples out there, this is perhaps one of the first commercially successful hybridizations of Hard Rock and the then nascent art form called Rap. The two forms have been blended together over the years many times, but it’s always been something of an uneasy relationship. Then in 2009, a band called Street Sweeper Social Club comes along with their self-titled debut album and wipes the slate clean with a mix of heavy rock and rap so new; so fresh you’ll wonder how the two genres ever existed separately. Guitarist/bassist Tom Morello (founding member of both Rage Against The Machine and Audioslave), producer/lyricist/vocalist Boots Riley (The Coup) and drummer Stanton Moore (Galactic) have created a sound that keeps the heavy edge and bombast of Rock N Roll while mixing in the lyrical panache that Riley is known for from his work with The Coup.

Street Sweeper Social Club opens with Fight! Smash! Win!, featuring dazzling rhymes and a wonderfully heavy guitar line. This should be gold for Modern Rock, Urban and Top-40 programmers. Morello shows off some great melodic guitar work on 100 Little Curses, in an arrangement that sounds like it might have walked out of the late-1970’s or early 1980’s. The Oath is a song of revolution, following the distinctive social justice vein that pervades Street Sweeper Social Club. Pointed barbs are blended with humor and poignant turns of phrase fit for mass consumption throughout the album. The Squeeze traces the line between poverty and violence in what starts out almost as a children’s song before breaking into a heavy rock/rap.

Clap For The Killers is the most sonically interesting track on the disc, as Morello gets his freak on with some seriously deranged riffs and progressions. Good Morning, Mrs. Smith sounds a bit like a classic rock tune done up with some serious guitar riffs. Other highlights include Somewhere In The World It’s Midnight, Megablast, Promenade and Nobody Moves (Til We Say Go).