Review: Rob Thomas: Something To Be Tour - Live At Red Rocks DVD 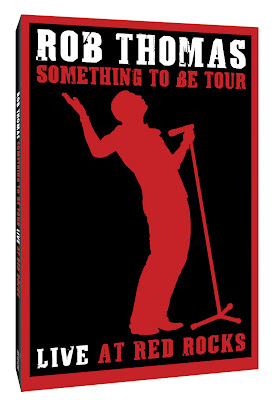 Rob Thomas - Something To Be Tour: Live At Red Rocks
2009, E1 Entertainment

On June 30, 2009, E1 Entertainment will release Rob Thomas: Something To Be Tour - Live At Red Rocks on High Definition DVD. This June, 2006 performance was filmed for a 2007 edition of PBS's Soundstage, and features seven songs not aired on television. Thomas is a household name both for his solo career and his work as singer/songwriter for Matchbox 20. Thomas already has three Grammy Awards under his belt, as well as a Songwriter Hall Of Fame Starlight Award. He has earned Songwriter Of The Year honors from both Billboard Magazine and BMI for two consecutive years and will also release a new album, cradlesong on June 30th.

All of Thomas' hits are here: Something To Be, If You're Gone, 3AM and Smooth are prominent. The real treats however are among the tracks that didn't make it into the hour long Soundstage program. Problem Girl has long been a concert favorite, and When The Heartache Ends and You Won't Be Mine are inspired. Thomas even gets in a spirited cover of David Bowie's Let's Dance. The crowd on this night at Red Rocks was very responsive to Thomas, and he seems to feed off their energy throughout the show. I have to admit I had always enjoyed the songs I've heard on the radio from both Thomas and Matchbox 20, but have always thought of him as something of a cookie-cutter pop/rock performer. This DVD changed my mind. Rob Thomas is a performer first and foremost. He perhaps doesn't have the flair or flamboyance of some, but he's heart and soul into every song and it shows.

Rob Thomas has accomplished a great deal in the world of music in a short time. Twenty years from now people will be attending his shows and trading stories about the first time they saw Thomas or Matchbox 20 live. As a songwriter he's a rare talent with a keen knack for pop hooks and highly listenable songs. Something To Be Tour: Live At Red Rocks is the perfect compendium of Rob Thomas' career to date. I suspect he's just getting warmed up.

You can learn more about Rob Thomas at http://www.robthomasmusic.com/ or www.myspace.com/robthomas. Something To Be Tour: Live At Red Rocks will be released on June 30, 2009. You can pre-order copies at Amazon.com.
Posted by Wildy at 5:10 AM