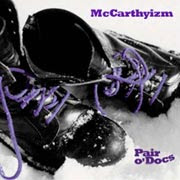 I recently had the opportunity to check out a local Buffalo band at a small private concert that a lot of my readers might enjoy. McCarthyizm has been together since the early 90’s and has released four albums; the most recent, Pair O' Docs, in 2001. The band continues to play together in spite of not recording in almost a decade and plays regularly around Western New York. Lead vocalist and guitar player Joe McCarthy has strong rock voice that can transcend the boundaries of folk and even the occasional Irish drinking tune, and the band plays like one that has been together for the better part of two decades. When McCarthyizm started out major labels were still pretty much the only way to get your sound heard; if these guys were starting out today they'd be getting a lot of attention in the Indie Rock world.

Pair O' Docs opens with All Night, something of a party anthem featuring huge and tireless hooks. It's a fun listen and the perfect opening to the CD. The Great Escape and Into Forever are deeply philosophical, playing around the edges of religion, epistemology and finding personal meaning in life. The Great Escape is done in an Americana style with strong and pleasing harmonies, whereas Into Forever is catchy acoustic/electric rock in the same vein as Canadian cult favorites Dig Circus. Pair O' Docs is a raucous rocker that is great on the CD and even better in a live setting. Reveal My Sin has a lilting Pop quality wrapped into its acoustic Rock arrangement, and is all about finding ways to let go of your inner demons. Walk In The Woods is a straight forward classic rock tune with some righteous guitar work and AOR-friendly hooks. The album closes out with Mt. St. Michel; a special song. It's the story of a dream vacation to France for two lovers where ultimately the vacation and then the relationship fall apart on the basis of different expectations (he's looking to get away, she thinks he's going to propose). The story-telling in song here is amazing; it's the sort of song that other artists are going to want to cover.

McCarthyizm is a hidden gem hiding out here in Western New York. There are bands like this all over the world; playing below the radar in a local market to appreciative crowds but having the talent and charisma to play for much larger crowds. It can be a matter of breaks or timing, but at the time McCarthyizm was starting out independent bands just didn't make it much of anywhere. By the time the Indie world really opened up, perhaps McCarthyizm had just accepted the "fact" of being a regional band. Whatever the case, this is a band that deserves your attention. Pair O' Docs is a great 7-song introduction to McCarthyizm. Make sure you check out this diamond in the rough.

You can learn more about McCarthyizm at http://www.mccarthyizm.com/ or www.myspace.com/mccarthyizm. You can purchase a copy of Pair O’ Docs from McCarthyizm’s Web store.
Posted by Wildy at 6:42 AM