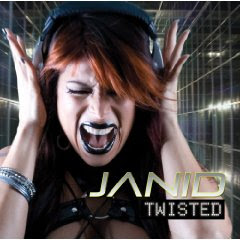 Puerto-Rico born songstress Janid is a musical chameleon with whose voice you may have heard before. She's lent her voice to a project with Frankie Cutlas; to movie soundtracks, radio and television commercials and even serves as the Spanish language voice on 1-800-JETBLUE. Janid's music has been previously featured in the Puerto-Rican mini-series El Ultimo Caso del Detective Prado, leading to her first record deal with Dead Ninja Records in 2006 and a move to New York City. Her debut album, Goddess, led to 4 star ratings on VH-1 and Amazon.com as well as selection as New York's Sexiest Latina by Farandulife Magazine. Her early music was in the R&B genre which prevailed on her second CD, One. Janid also scored a part in the motion picture Bare Knucklez, but felt highly constrained by the path she was on. A six-week sabbatical in 2008 led to a groundbreaking decision to attempt a foray into the realm of electronic music. With her third album, Twisted, Janid brings her high-powered vocal style to dark and roaming electronic tales punctuated by heavy beats and a slightly deranged demeanor. This "good girl gone bad" has wowed fans around the world, and Twisted is the album that just might take her to the next level of name recognition.

Janid jumps right to the head of the club class with Take Me Out, a pulsing, pounding dance tune with a solid melody and amazing vocal performance from Janid. Twisted brings a little raw sexuality to the dance floor as Janid seems to fully hit stride on her blend of R&B, House and Electronica. Think Mary J. Blige meets Kylie Minogue. Do Me is the song most likely to make Janid a household name; a near perfect blend of pop, dance and R&B. With a beat so relentless you can’t help but dance, Do Me also has the sort of melody line and hooks that mean you’ll be humming/singing it for days or even weeks. Janid shows a little of her softer side (vocally) on Red Velvet Curtains to great effect, proving that she’s not just a belter but a singer, and quite accomplished at that. Sacrilegious is a song that could garner Janid a lot of attention, but it’s not what you might think. Sacrilegious in this case refers to living your own life without the “keeping up with the Joneses” constraints that many fall prey to. The song itself is moody and bordering on dark, with a rhythm that would make Madonna blush. Other highlights include Puppet, Not That Far and Freedom.

Janid is a dynamic and talented performer with a voice that grabs you and holds on for dear life. Add in a smoldering stare that could meld steel and a Goth style of dress and demeanor and Janid is perfectly positioned for a run at the top of the dance/electronic charts. Janid is superstar in the making, and Twisted is destined to gain her a much wider audience. Twisted is a stunning, unsettling, and ultimately successful album.

You can learn more about Janid at http://www.janidworld.com/ or www.myspace.com/janidmusic; or you can tweet along with Janid at www.twitter.com/Janid. Twisted can be purchased at Amazon.com or as a download via iTunes.
Posted by Wildy at 6:15 AM

I love the "Twisted" album and Janid is the ultimate perofrmer as well!