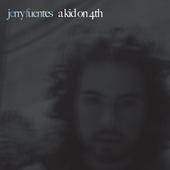 Jerry Fuentes - A Kid On 4th
2008, iLabel Music Group
Jerry Fuentes first picked up a guitar as a young boy with the intent of learning to play very fast. The maniacal intentions of that young child have turned into the subtle and well-thought muse of a young man. Jerry Fuentes' EP, A Kid on 4th, is like reading entries from Fuentes' diary. Each song is a highly personal attempt to work through something in his own experience and in its own time in space. The results are personal, personable and highly accessible bits of emotive rock attached to killer hooks; songs that won't leave your head no matter how much aural interference you create. With placements in Apple stores and on MTV's The Real World, you'll be hearing a lot of Jerry Fuentes for the foreseeable future.

Fuentes has this wonderfully textured voice that falls somewhere between Billy Joel and Corey Hart. He wraps this eminently recognizable voice in Americana arrangements that flow like water. His EP opens with Blinding Light, a song about leaps of faith. It’s an interesting song where the protagonist is asking someone to leap with him, not knowing if that blinding light is some form of glory or a train. Easy Fit finds Fuentes channeling early career Billy Joel, both vocally and in the piano part. The lyrics here were a bit awkward at times, but on the whole the song is very well done. Father’s Gun stands out as the darkest tune on the disc. This is one where it might be better for you just to listen as I suspect the range of reactions to his song will be broad and varied, but it will evoke a strong response. What It Is is a very well crafted song about the accidents of birth, the random acts of life and what it all means in the day-to-day movement to survive and grow. My favorite song on the EP is the closer, Keep It Burning. The song asks the classic question, how do you know when you’re in love, and proceeds to offer one man’s plan for finding out what he already knows. This is great songwriting.

I am not certain exactly what I was expecting when I popped in A Kid On 4th, but it wasn’t the highly nuanced and pleasurable listening experience I got. Fuentes still has a few rough spots, particularly the occasional bumbling lyric, but he’s got a world of talent and he’s learning to more fully express himself in song. A Kid On 4th is a strong introduction, and the beginning of great things from Jerry Fuentes.

You can learn more about Jerry Fuentes at www.myspace.com/jfmusic or http://www.jerryfuentes.com/. A Kid On 4th is available in digital format only. You can download it from iTunes.
Posted by Wildy at 5:10 AM