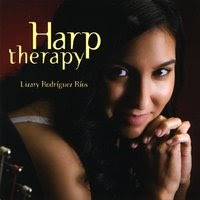 Lizary Rodriguez-Rios has wracked up quite an impressive resume, winning four international Harp competitions in Europe. She holds a Doctorate In Musical Arts, studying at the Music Conservatory in Puerto Rico, The University of Arizona and the Royal Conservancy in Madrid, Spain. She has previously performed as part of Grammy-nominated ensemble Harp Fusion, and has composed numerous pieces of television and movies in her native Puerto Rico. Rodriguez-Rio's second album, Harp Therapy, comes as a follow-up to 2006's Harp Voyage, which received favorable coverage from such august publications as The Classical Source (UK) and Fanfare Magazine.

Harp Therapy opens with The Purple Bamboo, a Chinese song played on harp in both pizzicato and lyric fashion. The song is quite lovely and flows nicely once it gets going. Rodriguez-Rios tackles Scarborough Fair essentially as arranged by Simon & Garfunkel in a lovely performance that's sure to be a crowd pleaser. The melody is traded back and forth between harp and violin, with the other always providing harmony or support. Le Cygne is a moving composition, having a sort of relentless motion to it, almost like the slow but steady movement of a river (or a swan swimming upon it, as the title may suggest). It's one of the lovelier moments on the CD. Rodriguez-Rios' reading of Grieg's Morning Song is instantly recognizable and is given a lot of depth by the strings that support and envelope the harp. Bach's Jesu Joy Of Man's Desiring is inspired, although the violin gets some of the choice parts here. Other highlights include Water Spirit, Pachelbel's Canon, Satie's Gymnopedie No. 1 and Harper Of The Western Winds.

Lizary Rodriguez-Rios is a master of her instrument, and the arrangements here are superb. Despite the title, Harp Therapy doesn't fit in with the sort of new-age relaxation or healing music that increasingly fills professorships and new age healing centers. For whatever else Rodriguez-Rios may be, she is a first class musician. Harp Therapy is a must-listen for fans of classical and yes, New Age, but don't expect a passive listening experience.

You can learn more about Lizary Rodriguez Rios at http://www.lizary.net/. Yu can purchase a copy of Harp Therapy at www.cdbaby.com/cd/lizary2.
Posted by Wildy at 5:10 AM