Review: Spinal Tap - Back From The Dead 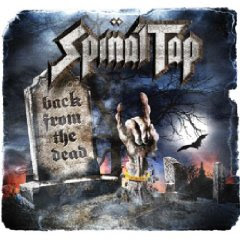 Spinal Tap is back (again?). David St. Hubbins (Michael McKean), Nigel Tufnel (Christopher Guest) and Derek Smalls (Harry Shearer) have re-recorded many of the classic songs from the soundtrack of This Is Spinal Tap and five new ones as well for Back From The Dead, released June 16, 2009. Spinal Tap resurrects itself every few years for brief periods, having started out as a TV skit in 1978 on ABC’s The TV Show. The actors have also appeared as The Folksmen in the movie A Mighty Wind. Guests on Back From The Dead include Phil Collen, Keith Emerson, John Mayer and Steve Vai. The two-disc set includes a DVD with commentary on each of the songs on the album, and is highly entertaining it its own right.

The album opens with Tonight I'm Gonna Rock You Tonight, which is either a typical bit of Glam braggadocio or the sort of song that will get your computer searched by various law enforcement agencies ("You're sweet but you're just four feet and you've still got your baby teeth / You're too young and I'm too well hung but tonight I'm gonna rock ya"). It's great Rock N Roll, and I don't think the intent of the song is bad, but if Sarah Palin hears it... Back From The Dead opens funereally with the rather obvious admonition "Give me reincarnation or give me death." The song is amusing, particularly for the faux Vincent Price voiceover in the breakdown section of the song. Junky Sex Farm brings the Funk high and hard. The horn arrangements are excellent, and the innuendo here is about as subtle as Darth Vader at an Edgar Cayce convention.

Spinal Tap breaks over into rampant novelty music with songs like Gimmie Some Money and (Listen to The) Flower People (Reggae Style), and continues right into Big Bottom. This last song sounds like Larry The Cable Guy tried to come up with a follow up to Queen's Fat Bottom Girls. Jazz Odyssey III sounds a lot like Pink Floyd (think Umma Gumma), and Stonehenge is a rather interesting paean to the Druids and the structure they left behind.

Spinal Tap has always been something of a joke, but it's a joke that has kept them laughing all the way to the bank over the years. The shtick on Back From The Dead is a bit tired, but the music is solid and Spinal Tap still knows how to entertain. These guys aren't as funny to me as they were when I was about 15, but that's okay. I hear they're still making 15-year olds in large quantities.