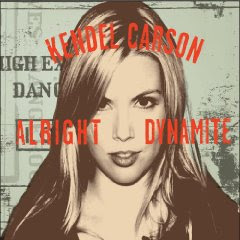 Vancouver’s Kendel Carson comes with a pretty solid resume for a 24-year old singer/songwriter. Her debut album, Rearview Mirror Tears, received strong critical acclaim, and her work with The Paperboys is highly regarded. On June 23, 2009, Carson will release her sophomore album, Alright Dynamite. Carson is generating a lot of buzz for this one, so we thought we’d check it out.

Carson thrives on provocative lyrics and a pleasant voice to thrive, but comes across with a lukewarm presentation on much of Alright Dynamite. Carson projects Sheryl Crow part of the time, like on Belt Buckle. The song is something of a free association on attraction. The arrangement is appropriately slinky but is ultimately ear candy without a lot of lasting impact. Lady K is a reflection on immortality, fame and creation against the backdrop of a relationship that may or may not be a one night stand. I Don't Wanna Be Your Mother revives the Sheryl Crow comparison with a decent effort at 1980's era Country/Rock. Carson revs things up for Ten Lost Men, her best effort on the album. The song is a well-written paean to how men are often saved from themselves by the women they love. Jesse James wants to be an iconic song, but it’s lyrically awkward and Carson just doesn't present it with enough charisma to sell it. The same thing occurs on New Shoes, a "whose zooming who" song about infidelity that is quirky and catchy in arrangement, but falls flat with the vocal line. The musicianship on Janis Joplin's Mercedes Benz is excellent, and Carson gives it a fair run, but it just doesn't hold up to the original. The rest of the album is filler that perhaps was left behind as B-sides for hard core fans.

I have to say I was disappointed with Alright Dynamite. Kendel Carson has generated a lot of buzz in advance of the release of Alright Dynamite, and I'm hoping that perhaps in the live setting she'll prove to be deserving of it, but this album just isn't as exciting as the buzz. Songs like Two Lost Men prove there's potential here, but this album is just too average to stand out in the crowded music marketplace.

You can learn more about Kendel Carson at www.myspace.com/kendelcarson. Alright Dynamite will be released June 23, 2009. You can pre-order a copy from Amazon.com. Check back at Kendel Carson’s MySpace page for digital availability.
Posted by Wildy at 1:57 AM