Review: Break Of Reality - Spectrum Of The Sky 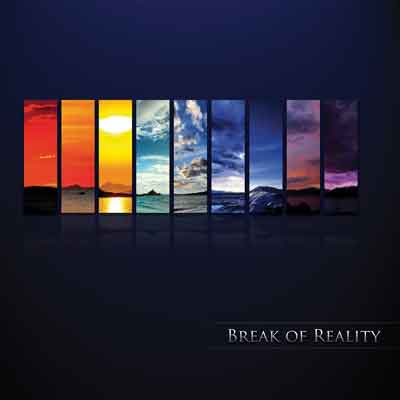 Break Of Reality is back and better than ever on their third album, Spectrum Of The Sky. Break Of Reality’s brand of “Cello Rock” is winning fans the world over. Their debut album, The Sound Between, has sold over 20,000 copies around the globe essentially on the back of live shows and word of mouth; pretty impressive for three classically trained cellists and one percussionist playing symphonic/Baroque rock originals. Philip Borter, Patrick Laird, Martin Torch-Ishii and Ivan Trevino are all Eastman School Of Music grads, and have played such august venues as Joe’s Pub, The Knitting Factory and the LaGuardia Performing Arts Center (New York City). Spectrum Of The Sky finds Break Of Reality digging more deeply into the musical vein that ties classical and popular music together.

Spectrum Of The Sky opens with Farewell, a highly lyric musical sonnet with a great deal of texture; written in mini-movements that blend one to another like the scenes in a play. There are some devastatingly beautiful harmony passages starting around the 2:30 mark that on their own make the disc worth owning. The Accidental Death Of Fire has a cinematic quality to its soaring, driving progressive rock heart. Themes merge, blend and re-emerge across a changing musical landscape that ends on the drifting tendrils of a dream. Vintage (Sans Drums) is a wonderfully rhythmic piece; orchestral hard rock in acoustic form. There is so much rhythm generated in and by the strings that percussion is superfluous. Spectrum Of The Sky (the title track) is such a palpably physical experience it’s a bit surreal. The song climbs out of dark, melancholy and perhaps even mournful depths to soar. The sounds of rain accompany the final minute or so as Spectrum Of The Sky slowly descends into the silence of night.

Comfortable Silence works as a quiet bit of musical repose. A lot of instrumental music is suitable for background listening, but not this piece. Comfortable Silence is more like an internal conversation you can push to the edge of your mind but never leaves and continues to influence your thoughts even when you’re not paying attention. Che turns into a highly energetic and intelligent composition; there’s a sense of pending violence that runs through the song that is tempered by the deep sonic stability in the cellos (like the concept of man’s nature versus thought). The anger or pending violence gets channeled into a relentless drive interspersed with lyric passages. Spectrum Of The Sky closes out with Anodynia, a chamber rock symphony in four movements, the highlights of which are the second movement, Allegro – Mysterioso and the fourth movement, Finale. Allegro – Mysterioso has a delightfully exotic, almost space-age feel. Glockenspiel provides a rhythmic effect that you sometimes hear in electronic music and might represent the cataracts of a river, while the cellos are the gentle but insistent currents that drive the piece. Finale has a rather sudden, unexplained ending that is perplexing until you take the album as a whole.

Spectrum Of The Sky seems to focus on endings, be it death or some other final curtain. It’s wonderfully dark and full-textured music; a challenging listen. If Radiohead ever had the opportunity to let loose their dark, melancholic musical souls on strings it might sound a bit like Break Of Reality, but probably not quite so profound. Spectrum Of The Sky is a master class in instrumental songwriting and performance. Whatever your musical tastes, it’s worth the time and effort to check out Spectrum Of The Sky, a Wildy’s World Certified Desert Island Disc and an album to garner Break Of Reality significant attention around the world.

You can learn more about Break Of Reality at www.myspace.com/breakofreality or http://www.breakofreality.com/, where you can purchase a copy of Spectrum of The Sky. You can also download the album from iTunes.
Posted by Wildy at 5:20 AM

I love Break of Reality! Lots of cellos with drums driving the sound. This was a great review. Thanks for the info!