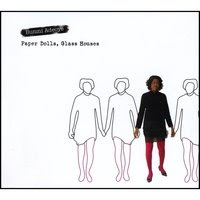 Bunmi Adeoye (Boo-mee A-Day-Oh-Yeh) is a hopeless romantic, and one who has been scorned judging by the songs on her debut CD, Paper Dolls, Glass Houses. With the melodic sense of Carole King, the gritty truth-to-tell nature of Tracy Chapman and the vitriol of Ani DiFranco, Adeoye spins a web of tales that will hit home with anyone who's even been on the bad side of a breakup. The Toronto-based Adeoye lists influences as disparate as KT Tunstall, Damien Rice, Barbara Streisand, Judy Garland, WHAM!, Sade, and Harlequin romance novels.

The first thing you’ll notice about Adeoye is that she has a magnificently unaffected voice. I don’t know what sort of vocal training she’s had, but Adeoye sounds like a natural singer. There’s an earthy quality to her singing that sets the listener immediately at ease, and her tone is gorgeous without ever sounding garish. She is the sort of singer you could literally listen to all day long. Adeoye kicks of Paper Dolls, Glass Houses with Stop Lying, an emotionally, lyrically and melodically intense song representing one half of an argument in a relationship that’s going nowhere. The emotional edge here is palpable, and Adeoye’s voice makes it all the more believable. The song has a theatrical quality to it, almost as if you could build a show around it, but retains the Folk/Pop sense it was written in. Unbreakable Heart is a dance song that sounds like it might have come chronologically before Stop Lying, the urgent refrain of someone who will do anything to make a bad relationship work. Long Time Coming is an empowering song about throwing the bum out and works as a perfect prologue to the first two tracks.

Player Hate turns the tables on the players, in one of the hottest songs to emerge from the cauldron of 2008. Player Hate is blunt enough to make Ani DiFranco blush, and is the sort of song that could really break out on Pop/Urban radio. Tell Me is a Reggae-flavored pop song with a melody that just won’t stay out of your noggin. The harmonies here are downright gorgeous in their own right; this is another potential pop hit. Adeoye takes on the Barenaked Ladies’ What A Good Boy next, in an amazing cover of one of the band’s best non-singles. The song itself is about expectations and pre-conceived notions we grow up with around gender and the limitations they can place on us as we grow. It’s not an issue so much of overt sexism but the ideas so ingrained in our consciousness that we never think about them. Adeoye makes the most of a great song. Sad But True is a dark and beautiful song of detached mourning about a relationship the narrator could never win at. Adeoye’s vocal line here is striking and the harmonies are angelic. Adeoye closes out the album with a cover of Van Morrison’s Brown Eyed Girl. It’s a beautiful rendition, much slower and more contemplative than the original. Adeoye takes one last to shine on the vocals; a real pleasure to hear.

When I first listened to this album I was somewhat blown away; each successive listen has made that sense of “Whoa!” grow a bit. Bunmi Adeoye is a distinctive talent. She joins a cadre of strong, intelligent female singer songwriters (Tori Amos, Ani DiFranco, Tina Turner, Tracy Chapman, etc.) willing to, in turns, be tough, speak their mind, be vulnerable… just be themselves. Paper Dolls, Glass Houses is the sort of disc that grabs you on the first listen and tightens its grip a little on each successive play. Adeoye is a gem who should not stay hidden; she’s ready for the grand stage. Paper Dolls, Glass Houses is a distinctive find, a Wildy’s World Certified Desert Island Disc, and an absolute must for your music collection. Make sure you check it out today!

You can learn more about Bumni Adeoye at http://www.bunmisings.com/, www.myspace.com/bunmisings or www.twitter.com/bunmisings. You can purchase a copy of Paper Dolls, Glass Houses at CDBaby.com.
Posted by Wildy at 6:31 AM