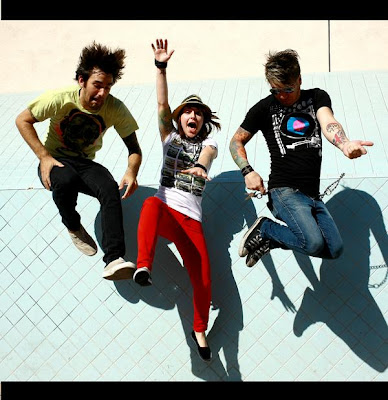 Marie Catastrophe grew up in a Texas town that didn't offer many opportunities for the singer/guitar player. Moving to Los Angeles, Catastophe made the ultimate leap of faith, selling her computer to buy an electric guitar and went to work busking. Before long she was doing open mic nights with material she developed on the streets of L.A. This led to meeting bass player Todd Bishop, recording and playing gigs in hotspots such as The Whiskey, The Troubadour and Spaceland. After a few life lessons about band life, Catastophe took control of the band. With the addition of drummer Trey D., A Louder Disaster found focus and a firm grounding in their own sound. The results can be heard on their debut EP, The Sweet Sound Of Revenge Songs.

The EP opens with (Drag My Name) All Over Town, a post-punk rocker with pop sensibility. Vocalist Catastrophe’s voice is vaguely reminiscent of a cross between Nina Gordon and Belinda Carlisle. The song is good listen and a decent starting point for the EP. Escape gets a bit repetitive, but has a clear 1980’s lineage and is a catchy and compact rocker that will stick with you. Stop The Sound is almost pure Pop. Catastrophe isn’t at her best here but gets by. Somewhere along the way something really clicked for A Louder Disaster; the next two songs are the best on the EP. The Art Of Scapegoating is catchy, almost virulently so. Evil Ways is the best song on the disc, but isn’t as convincing coming from Catastrophe as it might be from another source. Her voice has this vaguely tinny quality to it that distracts from the message. Stupid Kid shows a lot of potential for the band as songwriters; adolescent/young adult angst, love and immature emotions are all wrapped up in song that truly conveys some of the confusion they engender while maintaining a distinct Pop sense. One gets the impression that the song isn’t quite complete, but then again it’s written probably from within the core of those emotions rather than from the detached view that time allows, hence some of its power.

A Louder Disaster is a band with distinct talent as songwriters and musicians. Vocalist Marie Catastrophe has a decent voice, but isn’t always up to the material she’s writing with the band. She falls into a style of vocalists from bands such as Veruca Salt, Belly and the Go-Go’s, but just doesn’t quite capture that same sound. The Sweet Sounds Of Revenge is a bit uneven but shows some promise.

You can learn more about A Louder Disaster at www.myspace.com/alouderdisaster, where you can purchase a copy of The Sweet Sound Of Revenge Songs EP.
Posted by Wildy at 6:27 AM