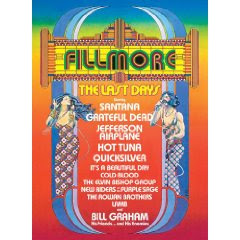 June saw the DVD debut of a long lost Rock N Roll treasure. In the 1960's, The Fillmore West (San Francisco) was to California Rock N Roll what CBGB's was to the 1970's Punk scene in New York. Many of the bands known for propagating what became known as the San Francisco sound either got their start there or played there on their way up. Rock legend Bill Graham ran the place, but closed it in 1971 because he felt the music business was becoming jaded: Artists were getting too full of their own success and began demanding too much. Graham decided to get out before the music business ruined the music (he was also a visionary). Graham didn't go quietly however. He scheduled five nights of shows, culminating on July 4, 1971 with a show that included Santana, Creedence Clearwater Revival, Tower Of Power and others.

In 1972, the documentary Fillmore: The Last Days was released. Aside from the music it included, it was a gritty look at the dark side of the music business. Some of these insights my seem a bit dated but are still relevant today. The DVD features performances the Grateful Dead, Jefferson Airplane, Jerry Garcia, Santana, Lamb, Cold Blood, Hot Tuna, The Rowan Brothers, The Elvin Bishop Group and New Riders Of The Purple Sage. The track entitled "Rehearsal Jam" (The Rowan Brothers) is probably the musical highlight of the DVD, and that's saying a lot considering the artists and material presented here. While the documentary is 37 years old and focused on the San Francisco sound, it's a shame that at least one track from Creedence Clearwater Revival's legendary July 4 set wasn't included.

The DVD is being released by Rhino Records in conjunction with The Bill Graham Memorial Foundation, which continues its philanthropic efforts on the part of under-represented or under-funded causes. The foundation offers grants in the areas of music, arts, education, social work, environmental protect and spiritual compassion-based projects. If you're a fan of San Francisco Rock scene of the 1960's and early 1970's then this is a must-have DVD. If you're an artist trying to make it in the music business (particularly as an Indie artist), then you really ought to buy or at least rent this DVD. If Bill Graham were alive today he'd undoubtedly be shepherding the Indie movement. The movie is well presented and still highly relevant almost four decades after its original release. Rhino has done a great job with the presentation, right down to the liner notes by original Rolling Stone editor Ben Fong-Torres. Fillmore: The Last Days is essential viewing for rock fans and all those who would make music in a commercial environment.