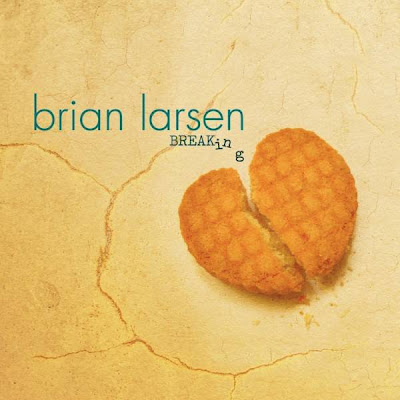 On August 4, 2009, Brian Larsen will release first solo album, Breaking. Larsen has previously released 7 albums, 2 EPs and a number of singles under the band name of Twilight’s Moon. Currently 23 years old, the Baltimore, Maryland resident recorded and released his first album at the age of 11, and has even produced for the band All-American Rejects.

Breaking is an album with distinct pluses and minuses. Larsen has a talent for subdued yet peppy Folk/Pop/Rock songs that are pleasant to listen to. His voice is strong and clear with a touch more vibrato than you generally hear in Pop music but it works for him. Larsen tends toward a monochromatic writing style (i.e. Hang On), relying on repetition and persistence to reinforce his ideas. Larsen sounds a bit like Paul Simon at times and uses that same understated, almost repressed vocal style that Simon has used at times throughout his career. Songs like Stay Or Break, Frozen and Hang On have strong pop sensibilities. Stand My Ground shows Larsen breaking out his serious songwriter aspect. Imagine a mildly aggressive Toad The West Sprocket here. There's the occasional bomb as well, such as Open Heart, but generally any deficits on Breaking revolve around charisma. Regardless of a person's ability to present live, some folks just don't come across as dynamic on recorded medium (similar to some people just don't photograph well). This may be the case with Brian Larsen, or it may be an issue to lay solidly at the feet of the producer (also Larsen). Either way, there is a flatness that comes across at times throughout Breaking that may put off some listeners.

Brian Larsen has made a strong effort with Breaking. His voice is very enjoyable and his songwriting is generally quite strong. A few of the songs presented here are better than they come across on CD, but on the whole it's a good effort.

You can learn more about Brian Larsen at http://www.twilightsmoon.com/ or www.myspace.com/twilightsmoon. Breaking will be released on August 4, 2009.
Posted by Wildy at 5:00 AM

LOVE this album. just discovered his music recently and i really think its a breath of fresh air.

It won't have effect in actual fact, that's what I suppose.