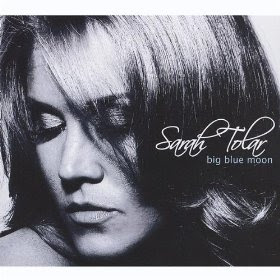 Sarah Tolar grew up being exposed to the music of great singer/songwriters like Kris Kristofferson, Johnny Cash, Judy Collins & Carole King. Her parents were a folk duo in Northern Colorado and Tolar began sitting in at the ripe old age of 5. A move to California brought piano lessons from Dad and the early seeds of songwriting. After discovering Jazz, Tolar went on to study Jazz at the University Of North Texas and found her way to New York City after graduation. Graduating from restaurant gigs to leading her own band, Tolar built life experience and a well of songwriting experience along the way, culminating in the release of her debut album, Big Blue Moon earlier this year. Produced by David Cook (Jennifer Hudson, Natasha Bedingfield), Big Blue Moon contains a bright mix of Folk and Jazz with a distinct Pop sensibility that should garner a lot of attention for Sarah Tolar.

On Big Blue Moon, Sarah Tolar sounds a great deal like Norah Jones but with a little more sass and a somewhat more dynamic vocal style. Tolar’s voice is very sweet and warm and wraps itself around melodies like a string around your finger. The CD opens with Early Morning Stillness in a smooth arrangement featuring plaintive piano and a gorgeous melody line. Take Awhile is a vulnerable but tough song about coming back from the loss of a relationship and finding oneself again. Hudson is a great Jazz/Pop arrangement juxtaposing the continuity of a river (The Hudson) against the emotional chaos someone feels upon losing someone significant. Oddly enough, my least favorite track on the disc is Big Blue Moon, the title track. It’s not a bad song, but just didn’t seem to fit in as well with the other songs here.

Along For The Ride is a funk and sultry bit of Jazz/Pop that features what may be the best outright musicianship on the disc; it’s a song you could put on repeat and not get tired of anytime soon. Come To Me is a classic come-on song featuring mostly just Tolar and her piano; this is a must-hear track. Coffee Man digs a little deeper into the Jazz genre and features some outstanding guitar work. The best vocal track on the disc comes with Don’t Call Me Baby. The song is sung by someone who’s been spurned in a relationship and is now telling her former partner to get lost. The song is done with a swing feel, and here Tolar reminds me a lot of Martina Sorbara in vocal sound. The album closes out wit Gettin’ Back To Me Again, a highly introspective and emotive track. The song sounds like it could be a soliloquy from a Broadway musical and is hands down the best songwriting on the disc.

Big Blue Moon is a breakup and recovery album that finds Sarah Tolar venting her anger and frustration in gentle tones. The Norah Jones comparison is going to happen early and often, because stylistically and vocally they are very similar. But Tolar’s voice has more energy and life to it than Jones has displayed in her recordings, and as a songwriter she shows flashes of brilliance. Big Blue Moon should make something of a commercial splash for Sarah Tolar, but fans who appreciate great music and great songwriting will eat this up.

You can learn more about Sarah Tolar at http://www.sarahtolar.com/ or www.myspace.com/sarahtolar. You can purchase a copy of Big Blue Moon at Amazon.com, or download the album from iTunes.
Posted by Wildy at 6:23 AM

Thank you for this article, pretty helpful information.