Review: Dala - Everyone Is Someone 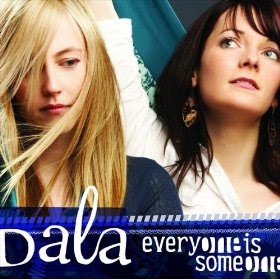 Dala - Everyone Is Someone
2009, Campus Music/Lenz Entertainment

Amanda Walther and Sheila Carabine met in high school music class and first wrote together in 2002. In the seven years since then, Dala has toured across Canada six times; performed at the Edmonton Folk Festival, Mariposa, The Ottawa Folk Festival and have played Toronto's storied Massey Hall six times. Dala is also the only Canadian act to be invited to play at the 50th anniversary of the Newport Folk Festival in 2009. With two previous albums and four Canadian Folk Music Award nominations, Dala come into 2009 at the top of Canada's Indie circuit and ready for bigger waters. On June 9, 2009, Dala released their third disc, Everyone Is Someone. With comparisons to the Everly and Louvin Brothers as well as Emmylou Harris, it's easy to see that this could be a breakout year for Dala.

Everyone Is Someone opens with Lonely Girl, a song about how loneliness can breed bad decisions, and vice versa. The narrator shows a strong sense of self ("I'd rather be alone than someone you take home") in response to a man who "holds his lovers like quarters". The song is smooth and lush and yet emotionally charged. It's a definite change of pace, as this kind of emotional backbone in song you might generally expect in a rougher musical environment, but Dala writes/play in a fairly straight-up acoustic rock style with hints of Country on the edges. Crushed throws a wicked curveball at listeners, starting out at the wedding of another person and bemoaning the fact that the protagonist has never known love. Much later in the song we re-visit a wedding scene, and learn that she met the man she loves at her own wedding. The song is a bit of a mystery novel set to music but definitely makes the listener sit up and listen.

Levi Blues has a bit of a Wilson-Phillips feel to it, and would be a perfect marketing song for the brand it plays off (don't be surprised...). This is a great pop song in the classic sense, playing off the melodic and harmonic styles of 1950's and early 1960's female pop vocalists. The ladies of Dala certainly harmonize well, and this could almost be a signature song for their sound. Horses has the feel of memory; a moment from childhood punctuated by the scenery outside a car window. The song is sadly beautiful, declaring victory over sadness but awash in a deep sorrow. Northern Lights is a moderately upbeat song about being apart from the one you love. This is a great Folk/Pop song that deserves a great deal more attention than it’s likely to get from Pop Radio. Younger is a mellow Pop tune that is a pleasant listen but didn't leave the sort of distinct impression that much of the rest of the material on Everyone Is Someone tends to leave. The album closes out with Stand In Awe, a song about love lost wrapped in a melancholy musical shell. A bonus track, a remix of Levi Blues is appended as the eleventh track in a clear case for the argument to never mess with the original.

On balance, this is a very strong album. There were a couple of missteps on Everyone Is Someone, but from a songwriting and performance aspect Dala have proven they have what it takes to gather and hold a crowd. Their crowd will fall more into the Folk and Easy Listening/Pop demographic, but if you're a fan of great female vocal groups then I urge you to check out Dala. This is great stuff.

You can learn more about Dala at http://www.dalagirls.com/ or www.myspace.com/dalagirls. You can purchase a copy of Everyone Is Someone through Maple Music, or download the album through iTunes.
Posted by Wildy at 5:57 AM

Thanks for the review! We appreciate the support!