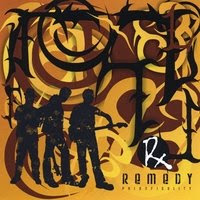 Remedy comes blasting out of Halifax, Nova Scotia as a two-headed musical monster offering a mixture of varied rock tunes and a slew 1970’s era Funk Rock songs as well. The band is a classic power trio with Steve Harley on vocals and guitar, James Bond on bass and Gil Roy on drums and backing vox. Harley and Bond are longtime members of the ECMA music scene, previously gaining attention as members of Devora and Sweet Tooth. Remedy’s debut album, Paleofidelity, was released April 4, 2009.

Paleofidelity is all about the Funk, my friends. In listening through for the first time, I was convinced that Remedy was headed for strongly commercial territory with songs familiar enough in style to get picked up by radio programmers but new and different enough to break out of the commercial pack. The first four songs on Paleofidelity would seem to bear this idea out. Up From The Bottom is Funky Rock N Roll with a bit of Blues thrown in. Rhythmic vocal lines accentuate the song structure and the strong, soulful vocals of singer Harley. Rude Reaction is a highly commercial hybrid of Reggae, Dave Matthews and Rob Thomas, all rolled up into one song. The melody here is the sort you're tempted to sing along with the first time you hear it and the harmonies are downright gorgeous. You Said To Me takes the Active Rock route with a bit of Elvis swivel in the rhythms. The vocal harmonies are again superb and the song is extremely commercial in sound despite its dark undertones. The sound on Paleofidelity starts to morph with Emergency Light, a classic early 70's Blues/Rock tune ala Led Zeppelin (although not quite as hard). The song is lyrically dense and the harmonies once again are sublime.

All of sudden, from track 5 on, Remedy is a different band, with a distinct emphasis on 1970's Funk/Rock. I'd have to say that the first four songs here were highly enjoyable and original (even if a little derivative at times), but the remainder of the album seems to get stuck on a sound and style and stay there (although it’s very well played). I love great Funk, but Remedy set the bar so high with the opening four songs of Paleofidelity that the rest of the album comes off as something of a letdown even though it’s very well executed. You'll want to check out Any Other Way, All In A Days Charade and So Much Better, but I'd almost recommend tracking the CD backwards on a playlist. Either way, you get to hear two sides of Remedy on Paleofidelity. Regardless of your tastes, there is a lot here to like.

You can learn more about Remedy at http://www.remedymusic.ca/ or www.myspace.com/remedythehalifaxfunkmachine. You can purchase a copy of Paleofidelity at www.cdbaby.com/cd/remedymusic, or you can download the album from iTunes.
Posted by Wildy at 6:38 AM