Review: New York Dolls - 'Cause I Sez So 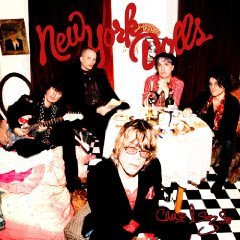 If the New York City punk scene of the 1970’s could be traced back to one forefather it might just be the New York Dolls. Mixing influences as rich as the Rolling Stones, classic R&B, rock and Philly Funk with an attitude that’s all New York, New York Dolls practically created the scene that spawned such bands as The Ramones, Blondie, The Talking Heads and Television. The New York Dolls reunited in 2004 after a long hiatus with original members David Johansen (known to some as Buster Poindexter) and Sylvain Sylvain. The New York Dolls rock their way into 2009 with a new album of original tunes, ‘Cause I Sez So.

The New York Dolls don’t mess around with the sort of edgy, maudlin alt-pop you hear on the radio nowadays. This is good old fashioned Rock N Roll with elements of Rhythm N Blues and the occasional dose of funk. ‘Cause I Sez So opens with the title track, a raucous, bar room song that you’ll want to shake your fanny to. Lonely So Long sees the Dolls embracing an Americana sound that is a bit surprising and yet fits them so very well. This is the sort of song you sing along to at a concert along with everyone else in attendance. My World is a blue collar, Rock N Roll love song that’s something of a throwback.

Making Rain is one of the stronger songs on the disc; an Alt-Country/Americana tune featuring outstanding guitar work. Drowning is a tasty bit of Southern/Classic Rock that opens with a guitar intro that isn’t in itself iconic but established a tenor and sound that is unforgettable (think Queensryche’s Silent Lucidity). My favorite song on the disc is Nobody Got No Bizness, a mix of Rock, Rhythm N Blues and a bit of Philly style funk. This is a great party tune that you won’t be able to get out of your head. ‘Cause I Sez So closes with Exorcism Of Despair, mixing elements of Rock and Punk with the frenetic drive of early Rush. This sounds like a 1970’s AOR staple.

The New York Dolls were a special band in a special time. Their successes in the early 1970’s paved the way for many artists who would come afterward. ‘Cause I Sez So is a very strong effort from the New York Dolls, and a sure sign that they have a lot of kick in them yet. If you’re looking for the roots of the Punk movement, look no further than the New York Dolls.

You can learn more about The New York Dolls at http://www.nydolls.org/ or www.myspace.com/newyorkdolls. You can purchase a copy of ‘Cause I Sez So at Amazon.com .
Posted by Wildy at 6:29 AM