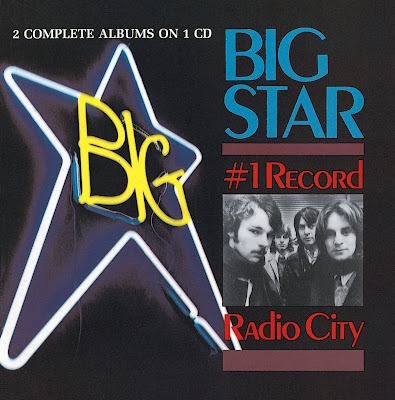 Big Star was a band destined to blow apart even as they were being formed. Coming off his association as lead singer of the Box Tops (The Letter), Alex Chilton moved to Memphis at the behest of Chris Bell (guitar) to work with his group Ice Water. The trio became a quartet and changed their name to Big Star, embarking on a brief yet ultimately influential recording career both driven by and mired in artistic and interpersonal tension. Ardent/Stax Records recently re-released Big Star's first two albums, #1 Record (1972) and Radio City (1974) on one CD. Additionally, each album is individually available on vinyl LP. Both albums have been re-mastered for this release, making slight improvements to a previous release of both albums on one CD.

Big Star flew in the face of pop convention in 1972, eschewing both the folk/ rock sound that grew out of the late-60's and the new progressive rock sound that was even then giving birth to what would become known as the AOR radio format. Big Star instead went for Brit-Pop inspired sound that drew on influences as diverse as The Beatles, The Kinks, classic American Rhythm & Blues and singer/songwriter pastiche. This tendency toward a singular band leader in vocalist Alex Chilton was the beginning of the end for Big Star, with guitarist Bell quitting the band before the sun had set on 1972. #1 Record didn't sell particularly well, being a few years ahead of its time, but songs like Don't Lie To Me, Feel, In The Street, The Ballad of El Goodo and When My Baby's Beside Me have influenced a artists as diverse as R.E.M., The Replacements, The Bangles, Teenage Fanclub and Primal Scream.

Radio City, made as a trio after Chris Bell's departure is a wonderful dichotomy of artistic and personal tensions, featuring wonderfully crafted pop songs that threaten to come apart at the seams at almost every turn yet never quite do. If it was personal animosity that drove the brilliance of this record then it's a tribute to the professionalism of the three remaining members at the time. Radio City spawned the song September Gurls, to this day still Big Star's best known song. Other highlights include Way Out West, Back of A Car, Mod Lang and O My Soul.

Big Star has reunited for reunion tours over the years, but original guitarist and catalyst Chris Bell perished in a 1979 car accident, and the pure magic of those early days will have to remain forever a memory. Ardent and Stax Records present those memories in new packaging for your listening pleasure. In spite of the re-master, the sound quality isn't significantly improved from prior versions unless you have very high end equipment to play it on (and if you're converting to MP3 then it probably isn't worth upgrading). If you don't own a prior version of this disc and you want to understand the roots of alternative rock with a melodic bent, then Big Star's #1 Record/Radio City is a CD you need to own.

You can learn more about Big Star at http://www.bigstarband.com/. You can purchase a copy of #1 Record/Radio City at Amazon.com or download the album on iTunes.
Posted by Wildy at 4:55 AM