Review: The Project Pale - Our Inventions And How They Fail Us 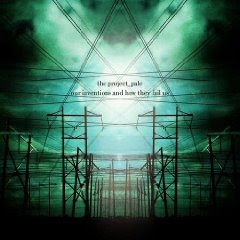 The Project Pale - Our Inventions And How They Fail Us
2009, Ohm Resistance

Sometimes familiar puzzle pieces re-assemble themselves into something new. The Project Pale is comprised of Kingston, New York's Jason Selden (aka Glitch from The Chosen); Submerged and Sensi*Star (aka Phillia Kim Downs). Each has a following and creative spark in their own right, but their talents and efforts merge as The Project Pale to create something new and original. The Project Pale's debut album, Our Inventions And How They Fail Us, incorporates Synth Rock, drone, shoegaze and a post-industrial mix of metal and electronic styles that will thrill fans of music best described as "unclassifiable". With production by the legendary Bill Laswell, Our Inventions And How They Fail Us is bound to create quite a stir.

Our Inventions And How They Fail Us opens on the unsettled electro-rock of Driving These Icy Roads before settling into dark, brooding wonderment on Snowed In. There is a cinematic feel to a number of the tracks here, almost as if The Project Pale is something of a post-modern Tangerine Dream. Many of the tracks here just have the sound and feel of soundtrack music. Cleopatra’s Needle is wonderfully primal in rhythm and features big, fuzzy electric guitars in a wash of sound that’s never overpowering but makes a distinct impression. Another Day Without is a wonderfully emotive track, soaring in dark, melancholy skies. My favorite track is With Open Arms; if Pink Floyd had been born in a digital age, this is what they might have sounded like. No Help Coming hits the cinematic nail right on the head, mixing grinding, industrial sound with exploratory, almost lyric passages for veritable musical roller coaster ride. Be sure also to check out the title track, Pulled Out To Sea and Transatlantic.

The Project Pale looks to bring Electronic music more into the mainstream by offering up an album that is as varied as it is unique. Our Inventions And How They Fail Us is a very ambitious project and mostly delivers on its ambition. The cinematic scope of the music means it may be a matter of time before the music of The Project Pale is coming at you in your local Cineplex. Some movie producer is going to hear them and realize what their potential is. Like Tangerine Dream, Glitch, Submerged and Sensi*Star have the potential to break a lot of ground as a team (as they have individually). This is a great album.
Rating: 4 Stars (Out of 5)

You can learn more about The Project Pale at www.myspace.com/theprojectpale. You can purchase Our Inventions And How They Fail Us at Amazon.com, or download the album through iTunes.
Posted by Wildy at 6:03 AM