Review: Ryan T. Jacobs - The Places You Might Have Gone 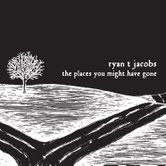 Born in Oregon but constantly on the move, Ryan T. Jacobs lives the style of an old-school minstrel, landing where the wind takes him until the next big gust comes along. Jacobs has played all over Europe, lived in France for a time and now calls Berlin home. His debut EP, The Places You Might Have Gone, covers universal concepts such as love, loss, loneliness, family and friends. With a style that walks the Dylan line somewhere between Neil Young and Damien Rice, Jacobs will seem instantly familiar to many listeners.

Jacobs has a voice that is at times strongly reminiscent of Roy Orbison, most audible on Elements, a highly philosophic song that even sounds like classic Orbison in the guitar work. Not to be pigeonholed, Jacobs seems to be a bit of a musical chameleon, sounding like a cross between Adam Duritz and Neil Young on Pieces. When Jacobs is on, his songwriting is crisp and his vocal performance is warm and pleasant. But occasionally things fall off the table on The Places You Might Have Gone, such as The Politics Of Live And Love, Amnesia or the falsetto vocal parts in Pieces. The highlights of the EP are Burn The Letters, a thoughtful and touching song about legacies, and Dear You, Oh Dear Me. The latter is a finely written folk/pop song that should gain Jacobs a lot of attention; the sort of song that other artists rush to cover.

Ryan T. Jacobs has strong qualities as a songwriter, although occasionally gets bogged down in the creation process (like most writers). At his best, Jacobs is as thought provoking as Rice, Young or Dylan. Vocally, all is well in the lower parts of his range, but when Jacobs goes into his falsetto range it can get a bit dodgy. All in all, The Places You Might Have Gone is pretty decent. Be sure to check it out.

You can learn more about Ryan T. Jacobs at www.myspace.com/ryantjacobs. The Places You Might Have Gone is available as a download through iTunes. (Photo by Janet Norris).
Posted by Wildy at 5:00 AM

Hey,
I respect your work very much. Well worded talent goes far in the journalism career. Keep up the good work, so far I've clearly understood and followed up with your writings and I just want to throw some kudos at you, very good to hear people putting their mind to words the clear way :)
Anyways, until the next time I run across your page, c ya' ciao!