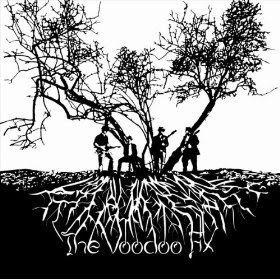 In the great church of music history, Emo and Punk developed as a Reformation to the excesses of corporate rock. In an L.A. scene bogged down in the Reformation, The Voodoo Fix held their own personal Counter-Reformation, resurrecting a classic blues sound in grand fashion (i.e. volume) and mixing it with the raw material stylistic flourishes of Rock N Roll, Funk, Folk, Punk and Soul. The band's self-titled debut EP establishes The Voodoo Fix as a musical force to be reckoned with, mixing a determined force of mind with a laid back sensibility that somehow don't seem to cancel each other out.

With My Voodoo opens the EP with a strong case of the electric Blues. Voodoo in this case is the spell musicians sometimes cast over fans. The guitar style here is pure Hendrix and the song is a great listen. Walk On By is an easy-grooving 1970’s Funk/Jazz/Rock hybrid. The music is strong but the vocals are a bit on the bland side. Don’t Come Home is high-energy rock that falls short of exciting in spite of the high energy level. It’s a decent song but musically the least interesting of the five songs presented here. Border Patrol is my personal favorite song, featuring the best/most interesting guitar work on the album. The vocals are again somewhat flat here (not flat as in pitch, but just not matching the energy level of the music). With the right re-work and a push from an influential source this song could have major commercial impact. Save Me closes out the EP and is built on a monster guitar riff with strong Funk and Blues influences. There’s a distinct Retro-Modern feel here that will appeal to fans of 1970’s rock as well as denizens of Modern Rock.

The Voodoo Fix is a very interesting venture; a young band with a debut EP that makes a strong case for their musicianship and ability to right. The sound is a little bit rough, owing some credit to the early-1970’s Rock era were Blues, Funk and Soul melded in one fashion or another to each other and to Rock N Roll. The Voodoo Fix is a band to watch. Some of the songs presented here deserve a more dynamic vocal performance, but that’s the only complaint I can find with The Voodoo Fix EP. This could be the beginning of a very long musical trip for The Voodoo Fix.

You can learn more about The Voodoo Fix at www.myspace.com/thevoodoofix or http://www.thevoodoofix.com/. You can purchase The Voodoo Fix EP as a download from either iTunes or Amazon MP3.
Posted by Wildy at 6:20 AM