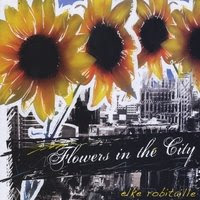 Musical nomad Elke Robitaille is home anywhere she goes as long as there's a stage to perform on. The British Columbia native and current Portland, Oregon resident has two national tours of the US and Canada under her belt and recently released her third album, Flowers In The City, featuring some of her most memorable songwriting to date. The folk songstress spent a few years deeply involved in the Los Angeles music scene, winning the Rock City New Award for Outstanding Folk Band in 2005, as well as working for Nettwerk Music. Robitaille also had a four month engagement at sea aboard Princess Cruises' The Diamond Princess.

Robitaille has a somewhat limited voice, but a very pleasant sound when she stays in range (the low notes get a little murky). Flowers In The City opens with My Own Way, a decent folk/pop love song that's heartfelt but not syrupy. Out Of My Life meanders its way out of the speakers with a gorgeous cello part complementing Robitaille's voice, but the energy level keeps the song from ever really getting off the ground. By the time she reaches I'm Doing Fine, Robitaille has settled in nicely and is ready to show off her songwriting chops. This relationship song is all about what's gone wrong. It's highly melodic and very well written. Bright Lights is a personal look at life in the city; all that it has to offers and the hidden moments you can find there. The song is poetic and full of real ardor.

Interlude is self-explanatory, an instrumental break that shows perhaps a whimsical side to Robitaille; slightly bouncy and possessed of interesting sonic components, Interlude provides a glimpse of another aspect of the artist as well as perhaps a chuckle or two. Move is my favorite song on the disc; a perfect mix of dark, furtive tones and Robitaille's voice. Gravity is also very well done; a song about having two destinies. The first is career oriented and the second is all about a person. The protagonist here tries to protect the former while holding on to the latter. Gravity represents the sometimes opposing pull of each destiny, and the strength and the character needed to balance both.

Elke Robitaille is a nuanced and subtle songwriter with a unique perspective; she's able to deliver her thoughts in enigmatic fashion without coming across as bizarre. A talented lyricist; her arrangements are fitting to both her subjects and voice. Flowers In The City is one of those albums you keep around forever and pull out once in a while. It probably won't be your top listen after your initial courtship, but will also likely never make it into the trade-in pile. A nice effort.

You can learn more about Elke Robitaille at http://www.elkemusic.com/ or www.myspace.com/elkemusic. You can purchase a copy of Flowers In The City at www.cdbaby.com/cd/elke3, or you can download the album through iTunes.
Posted by Wildy at 5:40 AM