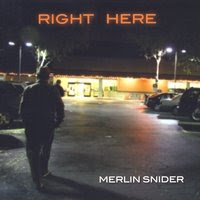 Merlin Snider is a craftsman. The California-based folk singer/songwriter has been compared to such musical luminaries as Woody Guthrie, Neil Young, Phil Ochs, Steve Goodman and John Prine. Making music at his own pace and in his own time, Snider follows up his 1999 debut, Between, with 2009's Right Here; infusing distinctive guitar work and minimalist approach into newly minted classic story songs that will have listeners on the edge of their seats.

Right Here opens with Santa Cruz, putting some of the western back into Country and Western. There's a real old time feel to this song that's part polish and part simplification. The First 25 Years is a classic story song about a man who descended into drink for the first twenty-five years of his marriage, only to be rescued by the love he so long neglected. Now the protagonist looks back laments all he has missed. Snider creates a character in song so real you expect to see him sitting next to you while you listen (ala Randy Newman). Insomnia is everything its name implies, discussing all the things that can get done in the middle of night, particularly catching up on those old Gilligan's Island reruns you missed out on.
Yellow Moon is strongly reminiscent of Crosby, Stills, Nash & Young. This dark country story song will stick with you in haunting fashion. Stuck In Ojai is a tragic comedy in song about how small town relationships can fall apart when one person moves to the big city and the other stays behind. The story here is humorous and well told (sung) in Snider's strong, clear country voice. Other highlights include Tall Trees, Molly's Got Her Red Dress On and Mama Don't Work Here.

Merlin Snider plays far enough out on the Country/Folk/Americana branch that commercial radio isn't likely to come calling soon, but he's about as fine a songwriter and story teller as you're likely to find. Right Here is a classic album; there are a few slow spots but on the whole there's little to dislike on Right Here. Make sure Merlin Snider makes it onto your "to listen to" list.
Rating: 4 Stars (Out of 5)

You can learn more about Merlin Snider at http://www.merlinsnider.com/. You can purchase a copy of Right Here at www.cdbaby.com/cd/merlinsnider or download the album from iTunes.
Posted by Wildy at 5:55 AM