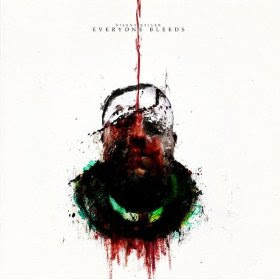 Brooklyn’s Silent Killer has a reputation for musical brutality on the Drum N Bass circuit, but his latest album, Everyone Bleeds is perhaps his most accessible album to date. Intermixing his killer Drum N Bass style with hip-hop (East and West), Electrohouse, musical atmospherics and vocal and music samples, Silent Killer has learned to hone his brutality with a spoonful of sugar. Influences include the Notorious B.I.G. and Don Davis, and the album receives some remix assistance from Breaker (Guerilla) and Submerged.

Everyone Bleeds opens with Savior, a hyperkinetic electronic binge mixing elements of Drum N Bass and Industrial. This is one of those songs where you just grab on and wait for the ride to be over; no quarter is given. Destroyer hits a bland and repetitive note, essentially becoming stuck in a loop that's truncated by a spoken word sample but repeats almost continuously throughout the song. Up next is Submerged's remix of Corpse, which plays like a bizarre dance club work-up of a horror movie chase scene. I had a hard time getting into this one because it seemed so at odds with itself. Rockers appears designed clearly for the club circuit, and will likely do well in that realm but doesn't amount to much more than a beat and a voiceover. The repetitive nature of the song makes it a difficult listen even halfway through. Supremacy hits some of the same issues with regard to repetition, although the passages are a bit more interestingly constructed.

Silent Killer's Everyone Bleeds is a highly average collection of Electronic compositions with some material very fit for the monochromatic club scene but little to really light up the synapses. If you're just looking to dance then this is a fine album, but there's not much original here; and there's not much to stretch either the listener or the artist.

You can learn more about Silent Killer at www.myspace.com/ohmresistance. (Check out their blog entry on Silent Killer here.) You can download a copy of Silent Killer at Amazon MP3 or iTunes. A CD version was released on April 27, 2009, but availability is sparse. If you send a message to Ohm Resistance through their MySpace page they might be able to direct you to someone selling physical CDs.
Posted by Wildy at 5:00 AM

In my view one and all should browse on this.