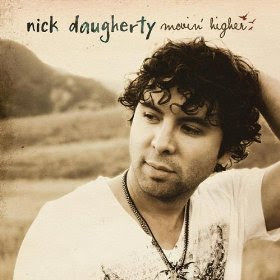 Daugherty opens with Movin' Higher, the title track, a mix of Americana, Blues and good old-fashioned pop music. The song is highly melodic with soulful backing vocals and a whole lot going on between the staves. Daugherty breaks into some easy flowing R&B on Out Of My League, a Delilah-worthy tune if ever there was one. Sick Day has a Barry Manilow does R&B feel to it that's pleasant to listen to although a bit odd in retrospect. The music here is generally in the Easy Listening/Adult Contemporary category, and works so well because Daugherty's voice is so pleasant and unimposing. Daugherty hits serious mix-tape territory with A Thousand Times Tonight, a sweet "falling in love" song that is sure to melt some hearts.

Staring At The Sun is a song about getting in lost in your own social scene, it's a high energy though slightly muted rock song with a high commercial ceiling. This sounds like movie soundtrack material for a teen comedy; don't be surprised if a bunch of artists pick this up as a cover tune. Daugherty steps back from the precipice of Rock N Roll with a jazz-flavored, Manilow-style ballad in Jamie. The songwriting here is exquisite, with Daugherty showing a lyrical finesse that is uncommon. This is another tune that sounds like licensing is in its future. The same lyrical acuity is noted on I Won't Stand For Watching You Fall Down. This song also hits on some mix-tape magic, but does skate dangerously close to the edge of cliché at times. The album closes out with Something More and Please Come Back Home. The latter is a love song written in a Blues and Gospel Rock format that's highly appealing to the ear.

Nick Daugherty writes Rock N Roll with some Blues, Gospel and R&B flavoring, depending on the mood of the song. Comparisons to folks like Barry Manilow, Marc Cohn and Joshua Kadison are inevitable. Daugherty's voice is a great sounding every man's voice; easy on the ears and with enough energy and heartfelt emotion to get listeners to buy into his songs. As a songwriter Daugherty is outstanding, possessing a talent for crafting lyrics that convey meaning without sounding trite. The material on Movin' Higher has a definite reading on the Schmaltz scale, but so what? When it's done well in the context of great songs, schmaltz is just another form of showmanship. Daugherty proves that showmanship is definitely a talent he possesses, and Movin' Higher is a great introduction who should be making music for many years to come.

Rating: 3.5 Stars (Out of 5)
You can learn more about Nick Daugherty at www.myspace.com/nickdaugherty or http://www.nickdaugherty.com/. You can purchase a copy of Movin’ Higher at Amazon.com, or download the album from iTunes.
Posted by Wildy at 6:22 AM