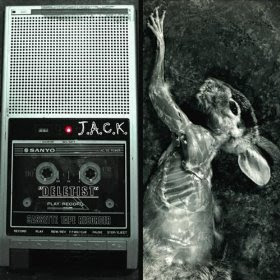 Brooklyn-based alt-rock quarter J.A.C.K. keep the meaning of their acronym secret, but the word of mouth about their sound was uncontainable almost from the start. Three rip-roaring sons of Rock N Roll met while enrolled in New York University's music program, and after cementing their sound with the highly flying falsetto of vocalist/guitarist Scott Holland knew they had something special. Their sophomore release (and first full-length), Deletist, is out today. J.A.C.K. may be secretive about the original of their name, and DIY to the bone, but their sphere of influence is likely to expand significantly in the near future.

Deletist opens with the chaotic track Dracula, which spends most of its time as an alternative rocker but closes out with a keyboard driven classic rock section that would make Dennis DeYoung weep with joy. One thing you should understand about lead vocalist Scott Holland is that he can be something of a chameleon. On The Leader, Holland sounds like a cross between Klaus Meine and Bon Scott, whereas on a track like Extinguisher he can sound like a particularly raspy Bono. I Cut Off My Arms is perhaps the greatest “relationship gone wrong” songs I’ve ever heard, although it may be a bit disturbing for some. A distinctly poppy love song with some heavy guitar work represents the alternately lovesick and disturbed states of the protagonist. Bug appears to be a song about torture, or perhaps it’s just an allegory for crossing lines. Either way it’s at least mildly disturbing and gets your attention, right down to the lyric dueling guitar work in the bridge. Suicide Man opens with what might only be described as a gospel choir in Hell before turning into an alternately minimalist and noisy arrangement. The song itself is intriguing and definitely off the beaten track. You’ll also want to check out Summer’s War and Rainbow Blood.

J.A.C.K., J.A.C.K., J.A.C.K., what are we going to do with you? You don’t fit in with the other bands. You have some of the loftier musical ideals of a Radiohead, the occasional slow-heavy drive of Black Sabbath or Heaven And Hell, an ability to write songs like what Bono might come up on a dark day and a wonderfully and slightly worrying warped world perspective. We’ll find a place for you, because I believe a lot of people will be intrigued by your sound, I am just not sure how we present you to the world. Hey, I know! Let’s bring everyone to a show in Brooklyn! After you melt all their faces for a couple of hours they’ll be hooked! They’ll be buying copies of Deletist hand over fist!
Rating: 4 Stars (Out of 5)

You can learn more about J.A.C.K. at http://www.jackbandnyc.com/ or www.myspace.com/jacknyc. You can get a digital copy of Deletist at either Amazon MP3 or iTunes. If you want a hard copy, the only place to get one right now is at a live show (Face melting is included in the price of admission), but if you contact J.A.C.K. through their MySpace page perhaps they’ll hook you up.
Posted by Wildy at 5:20 AM