Review: Ben Cooley Hall - Owning Up To A Life 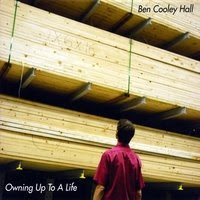 Ben Cooley Hall – Owning Up To A Life
2009, Caunounicus Records

Ben Cooley Hall walks you through his own personal journey on Owning Up To A Life, his debut solo album released in April, 2009. The Providence, Rhode Island singer-songwriter grew up in Boston, studying violin and voice from a young age. As co-founder of Boston’s The Mary Reillys, Hall released on well-received EP and recorded an as-yet-unreleased LP. With that band of hiatus, Hall began writing and playing out some of his own material. The end result is Owning Up To A Life.

Owning Up To A Life is a concept album; in this case a series of reflects on events or people past. Hall’s voice isn’t iconic, but has a shy/geeky/shoe gaze quality to it that is endearing; like this kid from school you knew for years who never spoke loud or often who all of a sudden one day you realize has a lot to say. Three Dream Excerpts on the album serve almost as the passages of a narrator, filling in the gaps between songs. Sunny Day has a highly memorable melody and is a bit quirky. It reminds me of some of Kevin Hearn’s (Barenaked Ladies) more pop yet off-the-wall material. Come To Care is awkwardly sweet with a lot of charm. My favorite song on the album is the Americana-based Untrue, which is not only the best songwriting here but also the most emotionally relevant song on the disc. Lot More Caring has potential but comes off a bit flat on CD. The rest of the material here is pleasant but doesn’t leave a strong impression.

Ben Cooley Hall shows the seeds of being a decent songwriter. His style is eclectic enough to not have a distinct commercial flavor, but his brand of repressed, quirky pop is a definite niche with a following. Owning Up To A Life has a couple of memorable moments, and is a decent listen. Check it out.

You can learn more about Ben Cooley Hall at http://www.bencooleyhall.com/ or www.myspace.com/bencooleyhall. You can purchase a copy of Owning Up To A Life at www.cdbaby.com/cd/bch.