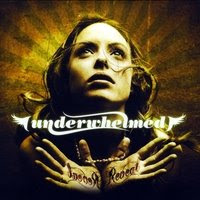 Brooklyn, New York rockers Underwhelmed hit hard on their newest album, Reveal. Thundering guitars, crashing chords and a total commitment to Rock N Roll are evident from the opening notes of an album that has already topped the charts on Garageband.com, IndieCharts.com and IndiesTop10.com. While Underwhelmed has been compared to bands like Nickelback and 3 Doors Down, their work ethic and dedication to their sound is reminiscent of some the biggest names of the classic rock era. However you classify them, Underwhelmed is going to make some noise in 2009 and beyond.

With a sound that could be compared to bands like Creed, 7 Mary 3 or 3 Doors Down, Underwhelmed also brings in the best elements of 1980's sound. Opening with Freak (Like Me), a Rock/Pop/Electronica hybrid, Underwhelmed show off the sort of big hooks and bigger choruses that made the 1980's music scene such fun. With You is a nice change of pace mid-album as something of a power ballad. Reveal is a big, airy rock anthem with a strong commercial vibe. The song is a fun listen but is enough like most of the other stuff you'll hear on Modern Rock radio that it fails to really stand out. For much of the rest of Reveal, Underwhelmed falls deeper into the bland, formulaic modern rock style that dominates rock radio. The songs in general are well-written and highly polished, but other than those noted above don't really make a lasting impression on the listener.

Underwhelmed shows flashes of real songwriting panache on Reveal, but gets too caught up in the sound of the moment to really exploit their collective talent to its fullest extent. Reveal is a decent debut and will certainly sell some units in the commercial environment, but won't have real staying power with listeners. Still, songs like Freak (Like Me) indicate there is much to be realized musically by Underwhelmed. The process should be a fun one to watch unfold.

You can learn more about Underwhelmed at www.myspace.com/underwhelmednyc or http://www.underwhelmednyc.com/. You can purchase a copy of Reveal at www.cdbaby.com/cd/underwhelmed4 or you may download it through iTunes.
Posted by Wildy at 5:00 AM