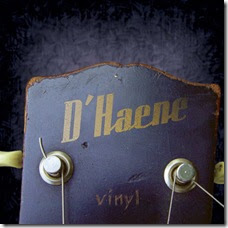 D’Haene is a New York City based quintet that combines 1970’s classic rock with the Alternative Rock style that arose once Grunge died down in the 1990’s. Singer/guitarist/songwriter Bob D’Haene is supported by Riley McMahon on guitar, Rick Guetschow on bass, Slammin’ Sammy K on drums and percussion and Tim McCracken in keys and backing vox. Vinyl, D'Haene's second album, is due to be released in the early part of the summer of 2009.

Vinyl is a blue collar Rock N Roll album mixing elements of Southern Rock, Blues and Soul into a delectable sonic package. Bob D'Haene has crafts songs that inspire the listener to sing along, full of big majestic guitar sound and a muted grittiness that gets under your skin. Vinyl opens with Another Like You, accented by dark harmonies around a strong, clear melody line. This is a great opening salvo. Wouldn't You Like To Know is danceable Rock N Roll with blues in its genes; party music with some great guitar work. Took Me So Long brings out the more soulful side of D'Haene. It's not my personal favorite song on the disc but is perhaps the most commercial offering here.

D'Haene brings back the danceable Rock with Brand New Threads!, starting with a Latin rhythm that morphs into a Rock N Soul number with a vibrant chorus. This is a definite potential concert favorite. This Dog Won't Hunt goes back to the Southern Rock well with backing vocals inspired by Gospel music. Blues and Soul mix in for a sonically pleasing experience. Be sure also to check out the highly melodic I'll Be Your Man, and My Woman, which is far and away the best song on the disc. D'Haene walks a line between The Black Crowes and Led Zeppelin here, with a bit of Rolling Stones oomph thrown in.

D'Haene has a sound that would be equally fun in a small concert hall or a big stage. The blue collar bar band feel to the record is a temporary experience, because Bob D'Haene has a knack for crafting big rock songs with pop hooks that won't quite let the listener go. I don't know how successful D'Haene will be in getting radio play, as their sound isn't the flavor of the month, but if you just want a good stretch of Rock N Roll you can get up and move to or stay comfy and groove to, then D'Haene's Vinyl is what you're jonesing for.

You can learn more about D’Haene at http://www.bobdhaene.com/, http://www.dhaeneband.com/ or www.myspace.com/dhaene. No official release date has been set for Vinyl yet, but early summer is the target. Keep checking D’Haene’s website(s) for more information.
Posted by Wildy at 6:00 AM